My friend Molly sent me a postcard last year with a recipe on it for Pecan Pralines. I’ve had it on my fridge for the past year and a half, waiting until I had the perfect combination of ingredients (I had to have whole milk and pecans in the house) and time (candy making isn’t fast).

This process took a while. I cooked the batch over low heat the entire time. Luckily, I was patient. I’m not sure how long the entire process took, but I know that I beat the mixture for about 5 minutes after it had cooled to make it creamy. I think I got 25 pralines out of this recipe, although some were larger than others.

These were delicious, and very sweet. The soft and creamy candy just melted in your mouth when you ate it. They were well worth the amount of time it took to make them. These are definitely not chewy pralines, but I suggest you give them a try anyway. 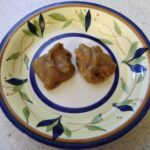