Although I eat a lot of bready things, I generally don’t eat a ton of bread on its own, and it’s hard for the two of us to eat even a loaf of sourdough bread without having a specific plan for it (like BLTs or bruschetta). Even so, I try to feed my sourdough starter every weekend – I store it in the fridge – to keep it healthy. I was pretty excited to make Sourdough Grissini so that I could use some of that starter for something different, rather than making sourdough pancakes and waffles all the time. We may not eat too much bread, but we do like snacks.

It had been a while since I’ve mixed a bread dough together by hand. I used to enjoy hand-mixing, but lately I’ve grown attached to my stand mixer. I decided it was a good time to try it again, given that the instructions called for mixing by hand. My dough seemed very sticky and wet. I’ve mixed some wet doughs with the stand mixer (like the Norwich Sourdough, from the same site, that I made a few weeks ago), but not by hand. It was so wet that I decided to try just kneading it in the bowl. I know, it wasn’t proper technique, but I also like keeping my kitchen surfaces clean, and I wanted to keep my pastry cloth clean to stretch out the dough later. I was also afraid I would add way too much flour to the dough if I kneaded it on another surface. I tried folding the sides of the dough inward, like a tri-fold, but really I just swirled the dough along the sides and bottom of the bowl in toward the middle, trying to move the dough as much as possible. I think this took about 7 minutes until the dough seemed to windowpane slightly, rather than just tear.

I let the dough rest for 2 hours, making tri-folding the dough twice at both the 40- and 80-minute marks. Making the folds was much easier (less sticky, in part because I made sure my hands were wet) than kneading was.

I divided the dough in three, weighing them to make sure they were even. I floured my pastry cloth and patted/stretched the dough out into a 12×4 inch rectangle. In retrospect, stretching the dough was probably counterproductive since it made the dough uneven thickness in places. I brushed the dough with olive oil and sprinkled with seasonings. My pizza cutter was in the dishwasher, so I used a knife to cut the dough into 16 strips. I didn’t cover the other dough as I worked, but it was still wet enough that it didn’t dry out.

I stretched some of the grissini out before I put them on a baking sheet, which means that they were uneven thickness in places. Also, I didn’t have large enough baking sheets to accommodate all of the little breadsticks, so one set was stuck on a smallish baking sheet. This really only meant that some of them got stuck together. I baked 2 sheets at the first time, and the 3rd sheet got to bake on its own. I baked the first set for 25 minutes, and the second for 27 or 28; none of the batches got particularly brown.

I made three kinds: one with sesame seeds, one with salt and pepper, and one with salt, pepper, and fennel seeds (affiliate link). All tasted pretty good, although Alex and I agreed that we liked the batch with fennel best. This isn’t a particularly good picture, but this was the best-looking batch of grissini. All of the sesame seed batch were a relatively uniform size, so they cooked evenly. Some of the other batches were particularly brown and crisp where the dough was ultra-thin. I think that’s probably about how all of the grissini should have been throughout. As I eat them tonight, I think that the most-browned portions taste the best. They’re by far the most crunchy.

That said, they all taste okay. A few of them seem a little chewy, and I can’t decide if that’s because I should have baked them longer, or they’re getting a little stale already (I forgot to package them up last night). The batch that I baked for 28 minutes turned out the best overall, and I may have baked them longer if I hadn’t gotten the dough thickness uneven.

To sum up: bake until very, very brown, and use fennel seeds (affiliate link) because they’re extra delicious. I’m pretty happy with my first try at making these, and I think I’d try making them again. The recipe was pretty straightforward, and I think they’d be easy to make regularly once I get the hang of shaping them. It’s also something different to do with sourdough starter other than making bread or breakfast. 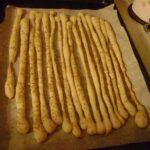