I was thrilled when I saw a recipe for Lebkuchen on the King Arthur Flour website. My aunt and uncle lived in (West) Germany for a few years when I was little, and when I was 6 , they sent us some goodies, including cookies in a tin. I loved the cookies, and probably got to eat most of them since my mom didn't like them that much. I couldn't remember too much about them, but I knew that they were sweet and spicy. A few years ago I came across a recipe for Lebkuchen, and the name itself sounded pretty familiar. I still have the tin, some 20+ years later, and sure enough, "Nurnberger Lebkuchen" is printed right on the bottom of it. [Interestingly, the ingredient list for these lebkuchen I ate years ago is: sugar, hazelnuts, candied orange peel, flour, chocolate, oublie wafers (?), honey, egg white, spices, vegetable protein, baking powder, stabilizing agent, salt, and sugar icing with natural flavors, tinted pink from beetred concetrate.]

The recipe for lebkuchen that I made 3 or 4 years ago tasted pretty good, but it was a pain to make. It had all the right components - honey, citrus, spice, nuts. I have distinct memories of staying up late in our apartment, almonds digging into my hands as I rolled the dough into small balls. [I still baked a lot back then, but I didn't always do it that well.] As delicious as they were, I haven't made them simply because they're pretty work-intensive.

...which brings me back to this new recipe. I was most attracted to it because it made bars of lebkuchen, rather than round cookies, which meant I wouldn't have to handle all that sticky dough quite as much.

I had to start this the evening before I wanted to bake the cookies. I heated the honey and brown sugar on the stove and brought it to a brief boil. It took a while for it to cool before I could add the other ingredients to it.

While the honey mixture cooled, I zested an orange and a lemon, chopped up almonds, measured out the spices, measured out 3 tablespoons of candied ginger to grind them up (which I think I ground too finely), and also got the ingredients ready for apple butter, which I was also going to cook the next day. [I meant it when I said it took a little while.] Once the honey was cool enough, I mixed in the zests and the egg, beating well. I mixed in the flour, spices, baking soda, almonds, and ground candied ginger. Once it seemed well combined, I covered it with plastic wrap and put it in the fridge.

The following evening, I took it out of the fridge to roll it out. It rolled out easily, but I didn't realize that I was supposed to roll it into a rectangle slightly smaller than the 9x13 pan that I was going to put it into (this tidbit was in the accompanying blog on the recipe, but not in the recipe itself). I also didn't think about the fact that the dough would stick to itself if I folded it in half to lay it in the pan. It tore as it went into the pan, and I was so frustrated with it that I took it back out and rolled it out a second time. This time it went into the pan just fine, but I had mismeasured so that there was lots extra along all the edges. (After all, you have to cut down pie crusts when you roll them out, so I figured this would be the same.) I simply folded the dough back over to try to form as even a second layer of dough as I could, and tried to spread it out as much as I could to reach the center.

This baked for 20 minutes, and the toothpick test came out very done. While they baked, I made a glaze of brandy and confectioner's sugar. I brushed this on the bars as soon as they came out of the oven, and several other times as they cooled, until the glaze was all gone. The glaze mostly settled in the valleys where the second layer of dough didn't reach, so I made a point of brushing the double-layered areas more.

I didn't have time to cut them after they cooled, so I covered them with aluminum foil once I knew that they were cool enough to not let off more moisture. I kept them covered for 4 days in the pan, way too long in any case. After that, I cut them and put them in a tin with a couple of pieces of apple for moisture.

These tasted good. However, I want to emphasize that I ate these after letting them sit in a pan, covered with foil, for several days, before storing them in a tin with a couple of pieces of apple. These were tender; they weren't dry, but they probably weren't as moist as they should have been. They have a very strong, bright ginger flavor, but they don't taste heavy like gingerbread (which gets a dark flavor from molasses).  I wish I hadn't ground the candied ginger so finely, because I think there were supposed to be pieces of it in the cookies, rather than just the flavor of it throughout.

Even though I could have made these better (not rolling out the dough too thin, not letting them sit for too long before storing them), I think they're very good. As proof, I'm still eating and enjoying them a good 10 or so days after I originally made them, and a week after I stored them. If I get a chance, I'll try to make this recipe again this season and update this post, because I do like these cookies. If you like ginger cookies but don't like the flavor of the molasses in gingerbread, you should try this recipe by all means. This recipe took some effort to make, but the intense cookies will stay good for a while. Before you make them, be sure to read through the accompanying blog for additional tips so you don't make the mistakes I did. 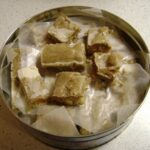 This dough is incredibly stiff after being in the refrigerator overnight. In the future, I want to see how it turns out if I roll it out or pat it into the pan on the day I make the dough.