I send my relatives fruitcake each year. I’m not a huge fan of fruitcake myself; I only like so much spice in my food, and the fruitcake I’ve always made has lots of cinnamon, cloves, and nutmeg. I make it with real dried fruit – I don’t really use any of the candied stuff in them.

But, this is the year that I make new recipes, so I wanted to try something a little different. I was going to try just a different recipe for fruitcake, something lighter and less spiced, but I kept putting off making it. I couldn’t decide for sure if I wanted to make it, and I didn’t want the fruitcake to be disappointing. What if they didn’t like it?

I was talking to my mom and telling her that I wanted to change the fruitcake recipe, but wasn’t sure if my relatives would like it. She sounded pretty noncommittal about the entire thing – she doesn’t like spiced cake much at all – but she sounded excited and intrigued when I mentioned that I’d found a cookie called Fruitcake Drops.

This recipe called for 9 cups of dried fruit. I really didn’t want to have to use all of my dried fruit (I was still going to make other things with it), and I wasn’t sure who all would eat the cookies, so I decided to halve the recipe. The recipe wasn’t difficult to make. I used rum for the alcohol, and plain apple cider since I didn’t feel like reducing it at all (I assume that’s what boiled cider is…?). For the fruit, I used mostly raisins, with some dates and cranberries mixed in– and maybe a few dried cherries, but I can’t remember. The recipe suggested using a stand mixer to add the fruit, since the batter would be extremely dense. The cookies are almost all fruit, so I’m glad I did this. There was little batter per cookie – the batter was just there to make sure that the fruit stays together.

These were pretty good. They stayed moist for a little while – I’m reviewing these a week and a half after I baked them, and they’re still moist. Raisins aren’t my favorite thing, but I enjoy the other fruit in these too. I made these as a gift, but if I were making them for myself, I would probably try a different mixture of fruit, including diced apricots or a few dried cherries. These were a quick alternative to fruitcake, and got positive reviews from people who wouldn’t normally eat fruitcake. Even the half batch made quite a few cookies (I got close to the yield in the recipe, although I forget the exact number), so these would be good to take to a large cookie exchange or holiday potluck. I’d try these again sometime. 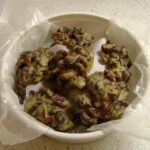