I feel like I've made a lot of Alton Brown recipes and in particular done a lot of AB baking - and I have. This recipe I chose to make not because it was Alton Brown's, though. I made this recipe, the 99th this year, because they were Overnight Cinnamon Rolls.

I was taking something in for a birthday brunch at work, and it was up to me to make something baked and/or sweet. I've made a lot of coffee cakes, and somehow cinnamon rolls came to mind.

From-scratch cinnamon rolls take time, and there's no way I was going to be able to make them in morning, so having a recipe that accounts for refrigeration overnight is great!

How to Make Overnight Cinnamon Rolls

This Overnight Cinnamon Rolls recipe calls for a stand mixer but you could just as easily assemble and knead the dough by hand. I wouldn't dare use a hand mixer, though.

I used about 2.5 or 3 cups of flour in the dough in the stand mixer before I kneaded it briefly by hand and then let it rise. This is to counter criticisms that the recipe as it's written uses too much flour and makes the rolls tough.

I rolled the dough out and spread two tablespoons of margarine along it. I've used melted butter on cinnamon rolls in the past and it's been a mess, so I've found that spreading soft butter with a knife is more effective for me. I doubled the cinnamon (to 2 tablespoons, equivalent to the amount in other recipes) because I'd heard that these cinnamon rolls weren't that cinnamony.

These were the prettiest cinnamon rolls I'd ever made, and I thought that before I even baked them. 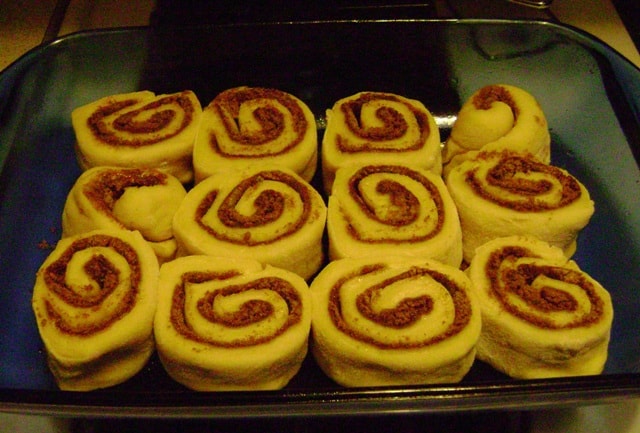 I let them sit out to rise a little bit (about 15 minutes, until I went to bed) because I know that my yeast doesn't rise as much as it should. The next morning, I pulled them out of the fridge and put them in the oven with a boiling pan of water underneath them. The steam should help them rise a little more, and come up to at least room temperature before you bake them. Then you remove the pan, heat the oven, and bake.

I'd heard that these could be overdone if you follow the time directions, so I checked them at about 20 or 25 minutes (whenever they started to look done). I inserted my probe thermometer (affiliate link) between the cinnamon rolls to see if they'd reached 190F, at which point I should take them out. They were at about 185F, so it didn't take long for them to reach doneness.

I mixed the cream cheese frosting with my hand mixer. I added a little vanilla to it because I thought that it could use it. I was in a hurry, so I spooned it over the still-hot cinnamon rolls so I could tote them to work. It's a shame it covers up the cinnamon rolls so much, but the frosting also makes them delicious!

These were an amazing hit. Everyone asked who made the "sticky buns." [Why do people call these sticky buns? They're cinnamon rolls. Is this a Midwest thing? Wouldn't a sticky bun be less cinnamony? Is a cinnamon roll a subset of sticky bun? *sigh*]

These were very tender and delicious. I can't think of a thing that I should have done differently. Just be sure to take these out of the oven when they look done and use more cinnamon than Alton Brown tells you to. I'll make these again, and whenever I make another cinnamon roll recipe I may adapt it so that it rests overnight as well. 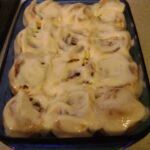 Delicious cinnamon rolls that you make the evening before, then bake for breakfast fresh the next morning!