Can you believe it's already September? With the continued hot weather, I have trouble believing it's almost the season to make chili and pick apples and bake.

I made quite a few recipes this summer that I haven't had a chance to tell you about. During warm spells this summer, I made a point of making salads. One of the salads I made a few times was Alton Brown's Asian Slaw. I don't like traditional cole slaw, so this is one of the few slaw recipes I've tried - and it's a great one. Deliciousness aside, it yielded a perfect amount for leftovers, and was very easy to make with the food processor.

This was a great slaw. Some bites were spicy, but the heat of the salad mostly accumulated over time. The peanut butter was not cloying, and the dressing was light. It was bright but balanced - lightly sweet, and not too vinegary. Overall, it was a refreshing salad. This was great as a light meal with chicken, and peanuts were a great vegetarian addition to the slaw. It's a great salad that I expect I'll make again, summer after summer. 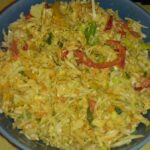