I've given up dairy for the past few weeks, cutting all butter and milk from my cooking and my diet. It's more than just not eating obvious foods like butter and cheese and milk and ice cream, though. Milk is an ingredient in so many things!

I don't miss much overall. I can pass up most goodies that appear at work - although one hungry day someone brought in donuts, which I eyed them longingly all morning. But in general, I cook enough that I usually have tasty, satisfying food around. It's still summer in St. Louis, though, so what I do seriously miss is ice cream.

I didn't feel like bothering to make sorbet, which would be fruity or chocolatey at best. I wanted something more vanilla-y, something more creamy, something with a little more heft than a fruit ice. I knew that I wouldn't be satisfied with sorbet right now.

While looking for dairy-free or vegan ice cream recipes, I stumbled across this Blueberry Crisp Ice Cream recipe that sounded promising. Blueberry sorbet had been my goal before I'd decided I needed ice cream. I expected the high-fat coconut milk would be a very satisfying replacement for actual heavy cream.

A basic run-through of this ice cream recipe: you make oatmeal with some rice or almond milk, then add the sugar, coconut milk, and other ingredients for the ice cream. After chilling and churning the ice cream, you layer it with a homemade blueberry sauce and granola for crunch. Not a difficult recipe.

I didn't have any granola in the house, so I decided to toast some almonds for crunch. Then I toasted the oats, and then cooked it with almond milk a little like you would a risotto, stirring frequently. After 10 minutes, I removed it from heat and added brown sugar, sugar, vanilla, a little nutmeg, a little salt, rum, and coconut milk. (Light coconut milk, which is what I had, would be too light. I used ¼ cup Trader Joe's light coconut milk, and 1 cup of Trader Joe's coconut cream to equal the fat content in coconut milk I would buy in the grocery store.) I chilled the ice cream mixture in the fridge overnight. The next day, I blended blueberries, sugar, and light rum, and let it chill while I churned the ice cream in the ice cream maker. The mixture was thick but it poured once I stirred it up. Once the ice cream was frozen, I layered it, blueberry syrup, and almonds twice in my freezer dish, and stored it in the freezer overnight to firm up.

This was surprisingly good. The ice cream itself was thick and creamy. It melted nicely. It did taste coconutty, but not too coconutty. I was apprehensive about having oatmeal in ice cream, but it wasn't bad; it's a little like having cooked rice in rice pudding. Even with alcohol included, the ice cream had to warm up for 10 minutes before I could scoop it, and I tried to scoop all the way to the bottom when I served the ice cream to get appropriate amounts of all layers. The almonds I included were nice in the ice cream, but I do wish I'd had granola instead. Overall, this recipe was pretty good, and it's worth a try even if vegan ice cream isn't your goal. 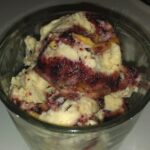