We recently celebrated Alex's birthday. I considered buying him a small cake as we were going out on his actual birthday and weren't having a party. I nixed that idea when I realized I would be disappointed with myself if I didn't make him a dessert, particularly since I could make it on a Friday to surprise him with it after work.

I've made Alex a variety of cakes and desserts for his birthday in the past (chocolate peanut butter cheesecake, chocolate peanut butter cake, an ice cream cake, a Spiderman cake), and I wanted to be sure not to reprise them. I looked through all the recipes I've bookmarked, and decided that while I wanted to bake, I didn't feel like layering and frosting a cake. A birthday is a great excuse to make cheesecake, so cheesecake it was.

Specifically, this Chocolate Caramel Cheesecake from Smitten Kitchen. I'm not always a big fan of chocolate cheesecake, but this cheesecake was delicious. It was dense and creamy. Some chocolate cheesecakes aren't very chocolatey, or are too sweet - but not this one. It had a very dark, rich chocolate flavor, with a little something extra from the caramel. The caramel didn't stand out, per se, but added to the overall richness and flavor. This is not a tooth-achingly sweet caramel cheesecake. To make it a little more obviously caramel, you could serve with a caramel sauce, of course. But we didn't find it necessary.

The cheesecake was easy enough to make. A food processor makes easy work of grinding chocolate graham crackers or animal crackers (I measured mine by weight) for the crust, and mixes the sugar and butter in evenly as well. If you want the sugar to disappear into the crust, dissolve it into the melted butter first. Use a light touch in patting the crumbs into the pan.

Next you make a caramel that you pour into the cheesecake batter. The caramel was quick to make, but I've made caramel a few times and am not afraid of using higher heat at the beginning. When mixing the cheesecake batter, be sure that your cream cheese is completely at room temperature before whipping it, and mix on slow when adding eggs to reduce the amount of air you beat into the cake. This will help you avoid cracks in your cheesecake. My cheesecake only cracked when I took it from the oven. To further try avoid cracks, you can cool the cheesecake in the oven slowly before chilling it; I just needed to get mine cold sooner.

I was really impressed with this cheesecake, and would definitely make it again. 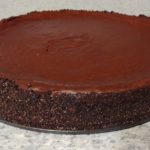 The secret to cheesecake is to be sure that your cream cheese is fully softened, to prevent lumps.