Toward the beginning of the year I got a subscription to Bon Appetit. The magazine isn't my usual cup of tea - there's too many articles about locations and restaurants, and not as much material about food and foodstuffs. Some of the recipes are more complex than I'd really care to make - and I feel like that's saying a lot, coming from a person who spent the majority of her free time in 2010 cooking.

However, I came across the recipe for a Double Banana Cake in the magazine and told my husband that I'd happily make it for him. The recipe sounded straightforward and relatively reasonable to make. I thought it would be just the thing to use up those banana stragglers that end up too ripe to just eat.

I said the recipe was relatively reasonable - if I ignore the fact that it took 3 sticks of butter and 6 eggs in the cake alone. 8 bananas total. 650 calories a serving. But I made it anyway...

I didn't have heavy whipping cream and didn't see the point of putting 2 whole sticks of butter in a buttercream frosting for a single cake, so I adapted a different buttercream recipe. However, I made mine with way too much milk, and I ran out of powdered sugar so tried to grind granulated sugar to be superfine. So I ended up with very soft frosting that ran a little, and that had a little grit from the pulverized granulated sugar.

So, use your favorite buttercream to frost. Add a layer of buttercream to the bottom layer. Arrange banana slices over it. Add top layer, and put down a light crumb layer of frosting. Use remaining frosting to coat.

I was not too thrilled with this cake since I tried it right after having frosting issues. However, it became better once the frosting set and the flavors had a chance to meld. The cake stayed very moist for days, and looked like banana bread. I enjoyed the layer of bananas in the center, although they did not stay pretty. The cake had a nice banana flavor, and was best chilled.

I took the cake to work to share, and everyone seemed to really like it. However, this cake doesn't impress me. The amount of butter and eggs in it seems excessive, and if I'm going to eat that many calories in a dessert, I'd rather have ice cream or a dark chocolate layer cake with ganache. I'm not a fan of sweet fruit, and bananas remind me of breakfast.

Make this cake if you love banana cake or know someone else who does; make the frosting included in the recipe if you want really fluffy frosting, because the frosting sounds decadent. Skip it for a great banana bread with a good glaze or icing if the calorie count scares you. Or definitely these banana cupcakes. 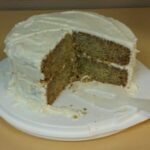