Thus, I use a lot of vanilla extract. Real vanilla extract is expensive in the grocery store. Sometimes you're lucky and you find a sale on it; the best sale I've ever found has been a dollar for a 1 ounce bottle. If you're a baker, you buy about 5 bottles to stock up.

I don't know exactly how I came across the how-to on making vanilla extract. I don't even remember what gave me the idea, but once I learned that I could make vanilla extract at home, I had to. It's incredibly easy!

I first started making homemade vanilla extract two and a half years ago (May 2009, to be exact). I got the tutorial from Vanilla Review, which doesn't seem to be updated very much anymore. It's a nice walk-through that I've linked to, with lots of great pictures. I ordered my vanilla beans (both then and now) from a store on eBay, but you could order extract grade vanilla beans (affiliate link) from Amazon or other websites.

Regular vanilla beans that you buy in the grocery store are usually for baking or cooking. For extract, you actually want extract grade beans, which have less water content and aren't as plump or nice-looking - and they should be cheaper. You could make vanilla with regular vanilla beans, but it would kind of be a waste unless that's all you could get your hands on.

So, you know what vanilla beans are. What makes them extract? Basically, you steep vanilla beans in alcohol of some kind (usually vodka, sometimes rum or another clear liquor). The extract you buy in the grocery store usually has a little sugar or corn syrup added to it as well, but it's really not necessary.

Doesn't that sound simple? Yes, it is actually that easy.

Step 1: Decide how much extract to make.

Considering I can easily use 3 ounces of extract within a month when I'm on baking kick, I decided to make roughly 3 cups of extract, using 4 ounces of vanilla beans.

I have a digital scale that I use to weigh my ingredients, so I used it to weigh out 4 ounces of vanilla beans.

I cut the vanilla beans in half, and then slit them length-wise. The tutorial says to scrape the vanilla seeds from the bean, but I don't think that's necessary. As you shake the mixture and it macerates, seeds will come loose from the bean. I cut the pieces in half again to make them easier to dump out of the bottle later on. I used a good knife, but it still took me about 20 minutes to cut up all those vanilla beans.

I use vodka to make extract because it's "flavorless." I've made vanilla extract from white rum before and it's particularly nice for baked goods, but I want an all-purpose vanilla extract. If you start with a full bottle of vodka, you won't have room for the beans. Yes, this is obvious, but I just didn't think about that the first time I made extract. Empty your bottle into measuring cups so that you can see how much you add back into the extract. 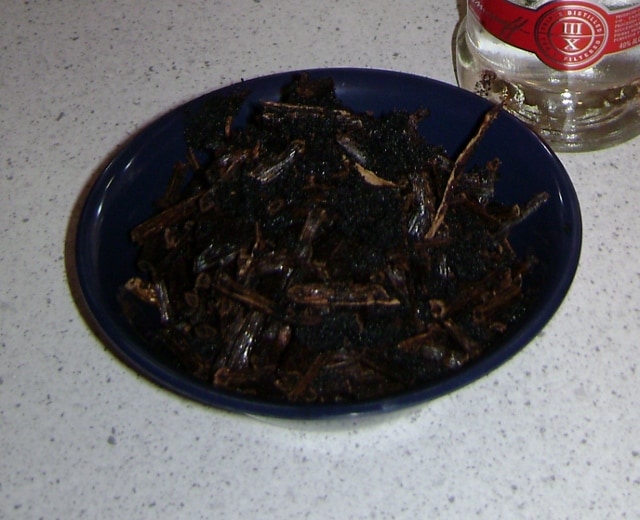 Put the vanilla bean pieces in the empty bottle. Top with vodka. I suggest using a funnel; otherwise, pour carefully, perhaps over your sink. I aimed for 3 cups of vodka, but I was only able to pour in about 2 ⅔ cups.

Put the top on and tighten well. Shake the bottle. You'll see that the liquid already starts to change color. I doubt it tastes any different from vodka - I wasn't going to try it - but it's a start! As you shake it, you'll free a few little air pockets that existed in the vanilla beans. You can top it off with a tiny bit more vodka, either now or at a later point. Don't get the bottle too full, though, or it might leak when you shake it.

Shake the bottle a few (or several) times a day every day. I generally shake it whenever I walk by it (which is often, since I'm the kitchen often). I've heard you can shake it well for a week, and then shake occasionally afterward, but I just can't leave it alone.

That said, you should store your vanilla extract in a cool location. My kitchen is definitely not cool when I cook, thanks to my old oven and stove, but I like to keep my vanilla extract where I can remember to shake it.

I've heard that you can start using the extract as soon as a month after you start it. It's true - you can use it, but it will continue to age and the flavor will intensify if you wait longer. I think the tutorial says to wait 6 months, and that the extract can age indefinitely.

As you use a little, you can add more vodka to it. You've made extra-strong vanilla extract, so you won't really weaken it as long as you don't add too much - in my case, more than an extra cup since I used 4 ounces vanilla beans. The vanilla beans will flavor the fresh vodka. I'm saving my extra vodka in a glass jar to do just that - top off my extract as I use it.

I usually just store mine in the vodka bottle on the counter, filling up empty 1 or 2 ounce vanilla extract bottles as necessary for easier use when I bake. It's fun to have a giant bottle labeled (vanilla extract) on my kitchen counter - visitors usually ask me about it if they're in my kitchen.

You can use your extra vodka, a spare vanilla bean or two, and some sugar to make a vanilla cordial. I made one once (I'll make it again and review it on here sometime), and it's worth trying.

Not only is making vanilla extract fun - if you use as much as I do, it's cost effective! For the 3 cups of extract I made above, I spent around 8 dollars on vanilla beans and 10 dollars on a cheap (but by no means the cheapest) bottle of vodka. That's 18 dollars for 24 ounces of vanilla extract that will be much better than anything I would buy! It's also a cool gift to give to any friends who like to cook or bake if you have extra bottles for the extract.

What to make with your homemade vanilla? Anything you want! However, I would suggest Vanilla Sugar Cookies, Sprinkle Cookies, or Confetti Cake. Or a Coconut Cream Pie with vanillay custard.