I love cake. I love raspberries. And I love lemon. It's only natural that I would be drawn to the combination of the three. However, not all variations of lemon raspberry cake are equal. This is a tale of a very complex cake with delicious buttercream, and of very simple and delicious muffins.

I took some cookbooks on my Kindle when we traveled for Memorial Day, and I read the Flour: Spectacular Recipes from Boston's Flour Bakery + Cafe (affiliate link) practically from cover to cover. I loved reading it; it had so many delicious-sounding recipes. The recipes are not for the faint of heart. Most of the cakes took no fewer than 5 sticks of butter, most of which goes into the buttercream frosting; and the recipes yield HUGE pastries and cookies. I was so entranced by the cake recipes - and the excuse to make real buttercream frosting - that I decided I had to try one.

So, way back in June, I made Lemon Raspberry Cake, from Flour. I would usually go into detail here, but was a long recipe - and unfortunately, not one that I'm likely to repeat. But to summarize, I made a 3-layer cake with egg whites, and a lemon curd, and a lemon syrup, and a buttercream frosting. None of these steps were particularly difficult on their own, but it was still 4 components. The cake was a little more involved than I generally like since it included folding in whipped egg whites. The lemon curd recipe was straightforward enough since I've made lemon curd before. It was simple enough to make the lemon syrup that was brushed on the cake layers to keep them moist. For me, the highlight of this recipe was learning to make real buttercream frosting.

The recipe combined half of the buttercream with lemon curd to use for layer filling, and the rest was used to frost the cake. I think it took me an active hour to assemble and frost the cake, not including breaks/wait time, which was recommended to get the cake to set and make frosting easier. I took a layer of cake, brushed it with lemon syrup; coated it with lemon buttercream; built a barricade of frosting on the edge of the top of the layer and filled it with lemon curd in the center; topped it with raspberries; and repeated. I topped this with a third layer of cake and syrup, and then chilled it for an hour to firm up the buttercream to make frosting easier. Next, I covered the cake with a crumb coat, and chilled it for 30 minutes to set. Finally, I frosted the cake, spread thin layer of lemon curd on the top, and prettily topped it with raspberries.

I learned 2 things from this recipe:

1. Buttercream is amazing.
2. Layer cakes are a huge pain if you're making them just because.

Now, this was certainly a tasty cake. It's hard to go wrong with the great combination of raspberry and lemon. The cake was lemony from the lemon curd. The syrup drizzled into the cake made it moist, although the layers would have been a little dry without the syrup since my hot oven overbaked them a little. The buttercream was amazingly light and fluffy, which belied how much butter (and hence, how many calories) it contained. I thought I would have qualms with buttercream due to the eggs, but the hot syrup ensured that the eggs were no longer raw, and I didn't notice them at all. Honestly, I cannot say enough about how easy it is to make a buttercream frosting, and how delicious it is. I'm still in awe of the way buttercream frosting comes together, but due to the butter content in it, I'll save it for a special occasion.

Although I love lemon and raspberries, this wasn't my favorite cake, nor my favorite lemon and raspberry dessert. The layer cakes were a little tricky to bake well in a temperamental oven, and I'm ambivalent on the texture of egg white-leavened cakes. I'm pretty sure that I spread out making this cake over a Saturday and a Sunday afternoon, but there were so many steps to making this cake, I got tired of assembling it. It would have been easier to stay motivated if I was making the cake for a special occasion. Even so, I'm not sure that I would make specific cake again.

I also did the calorie calculation on this cake, and wow - each piece was pretty rich. This was definitely a cake meant to be shared. Alex and I shared some with the people we work with, and it got lots of great comments. After all, buttercream is awesome!

Raspberries were on sale in early August, so I decided it was a great time to try Lemon-Raspberry Muffins. This is the raspberry and lemon cake that I've been waiting for.

These muffins came together very quickly - so easy to make. These were exactly what I wanted a lemon cake to be – sweet, moist, and tender. Light and fluffy. Very lemony. They didn’t need a frosting. The blackberries didn't work that well in them, but raspberries were fantastic! Both the full size and mini muffins were great snacks. I loved these muffins, and strongly recommend that you try the recipe. You get a pretty muffin and a lot of flavor for not a lot of effort. 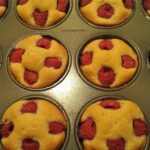