For Christmas 2010, my aunt Renee got me a one of those Holiday Gifts from a Jar booklets with lots of recipes inside. It gives instructions on how to make a presentable gift jar with a recipe attached.

This year, as I decided what edible gifts to make, I decided to have a little fun and make one or two of the recipes from the booklet. Of course, I can't send out anything I haven't tried before; that would be a recipe for failure.

I'm against any kind of mix that requires a lot of work. Once, I bought a coffee cake mix that didn't save me any effort at all. I still had to make two separate mixtures, one of which involved cutting/rubbing butter into the mix for a streusel, and layer them - the only thing you didn't have to do was measure ingredients. If I want to use a mix, it's because I don't want to do as much work! (I'm clearly a baker, because I don't mind measuring ingredients.)

As I looked at these recipes, I only wanted to give gift jars that would be easy for the recipient to make. I shouldn't give a gift that makes the recipient work. Thus, the best gifts would be ones where you simply mix in a few perishable ingredients, pour into a pan or scoop onto a sheet, and bake. Lithuanian Christmas Bread Mix fit this description.

I would like to tell you more about the recipe, about why this bread's history or why it uses poppy seeds or honey or raisins, but honestly, I know anything else to add right now. Just the recipe.

This bread was pretty good. Since it's enriched with milk and honey, it had the texture of a sandwich bread. I think I could taste the poppy seeds (vaguely nutty, I think), and the raisins were a nice change since I don't eat them very often. The honey glaze on top of the bread made the top crust tasty. As with most bread, I enjoyed it most toasted, for breakfast. The bread was a little dense (probably from the regular-rise active yeast) and so I would probably let it rise a little more if I make it again - to the top of the pan, rather than just under. I wouldn't usually make this bread, but it was a nice change of pace. 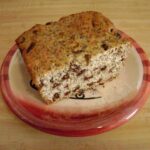