With the hot summer weather, I've really wanted cream pies. Recently I've made a Key Lime Pie (very refreshing and satisfying, and soooo easy - I strongly recommend it); a lemonade pie that never set; and a chocolate peanut butter ice cream pie which, although not a cream pie, was cold and refreshing (and a hassle since I'd rather just eat ice cream). With those gone, I decided that I finally had to make the Mexican Chocolate Cream Pie recipe.

I originally put off making this pie because I didn't feel like making a pie crust. I'm glad I did make the crust, though, because it was much better than a store-bought one, and it wasn't too difficult to put together. The crust was graham cracker crumbs, cinnamon, a little salt, sugar, butter, and an egg white. I tossed in the whole white that I separated from the yolk used in the pie, rather than measure it. The mixture was easy to press into the pie dish, and smelled great while baking.

The filling was more work-intensive, but also not incredibly difficult - just a standard custard. Whisk together sugar, cocoa, cornstarch, salt, cayenne, an egg, one egg yolk, and espresso powder (affiliate link) (which I skipped) in a bowl. Heat milk in a heavy saucepan to 180F; I used a thermometer because it's easier that way, but you can also just heat until bubbles form around the edge of the pan. Gradually whisk the milk into the cocoa mixture, little by little as to not cook the eggs. Return the mixture to the pan and cook for about 10 minutes, stirring constantly, until mixture thickens. Remove from heat, and stir in dark chocolate, or chocolate chips as I did.

The recipe says to cool the filling in an ice bath. I didn't, but I did allow it to cool a little, stirring now and then, before I poured it into the crust. I covered it with plastic wrap, put the pie in the fridge, and topped it the next day with Cool Whip and a few graham cracker crumbs.

This pie was really good. The cinnamon graham crust complimented the chocolate well. The cayenne was noticeable as a heated aftertaste in the throat and on the tongue. This wasn't the best chocolate filling ever - that honor still goes to my grandma's recipe - but it was still a pretty rich chocolate. The crust was best right after I made it, and got a little soggy over time. Overall, this was a great pie, and worth making again. 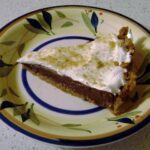