For my third week of bread, I decided I wanted to try Peter Reinhart's Cornbread recipe from The Bread Baker's Apprentice (affiliate link) again. I made this as one of my 365 recipes in 2010, but I used the corn frozen and had to bake it much longer than it originally called for.  I also wanted to try course-ground cornmeal this time around, which I didn't use the first time around. This time, I cooked the bacon in the oven as the recipe instructed, and I am now a convert to oven bacon. It cooked perfectly.

This cornbread was certainly delicious fresh. I liked the corn hidden inside the cornbread and the deliciousness of the bacon. I liked the gritty texture of the coarse cornmeal in this bread, and even though it may need soaking to cook thoroughly, I may have to start using it for all my cornbread. The cornbread was very soft and moist. 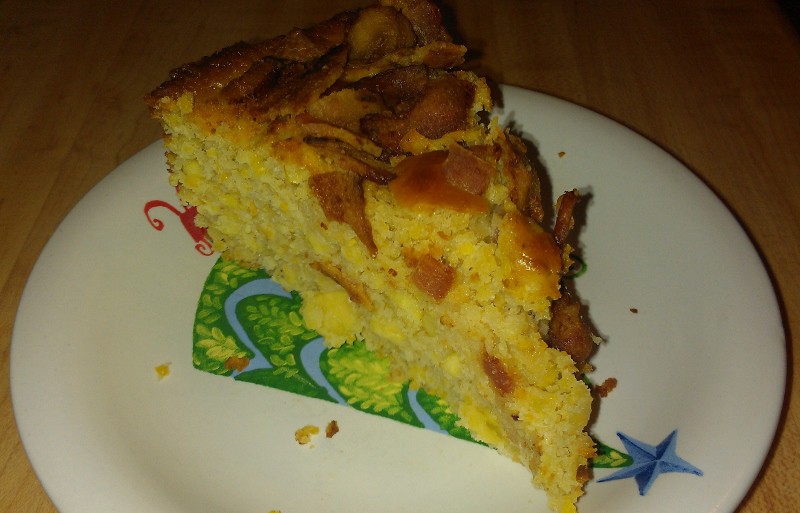 However, I still don't feel like I've perfected my baking of this cornbread yet. We had leftovers of this for several days, and I grew less interested in it each time I ate it. I think that for me, it was too moist. It has more eggs in it than I usually have in cornbread, and I think it might have been a little too rich for me, too. I like my cornbread a little drier and more crumbly than this turned out to be. I'm going to give it one more try sometime, in a 9x13 inch pan, to see if I like it better that way. Otherwise, I may just incorporate bacon and corn into some other cornbread recipe, because I think that's what stood out most to us for this cornbread.