I made Alton Brown's Tres Leches Cake several years ago, and liked it more than I expected. This year, I wanted to try the recipe from Smitten Kitchen.

Tres Leches Cake, literally a three milk cake, is a cake soaked in a mixture of three kinds of dairy, generally sweetened condensed milk, evaporated milk, and cream. In this recipe, the cake is a (butterless) sponge cake, but simplified so it's made entirely in a (single) stand mixer bowl. Very lightly sweetened whipped cream takes the place of frosting.

I liked this recipe more than Alton Brown's recipe, which I made before. This cake was very delicious. It was milky and sweet, without being tooth-achingly sweet since it's slightly sweetened whipped cream for frosting. The texture of the cake held up even after several days. Since the recipe says to reserve extra milk for serving, very little liquid leaked from the cake when I cut it. I didn't find the extra milk necessary since the cake stayed very moist.

Technical details: This is usually where I say "the recipe was simple." And it wasn't hard - for a sponge cake. Like many people, I find standard sponge cake recipes, where you whip egg whites to soft peaks and stiff peaks, and fold in other ingredients without deflating said perfect egg whites, to be a little tricky and nerve-wracking.

This recipe is nice because I could whip the egg whites (consulting the internet for pictures of "soft peaks" and "stiff peaks," because I still need visual reminders), and use the stand mixer to add all remaining ingredients except flour. Since I could use the stand mixer for everything else, I didn't worry (much) about deflating the cake when I folded in the dry ingredients. [Admission: I used the stand mixer on low for my first two additions of flour, contrary to the instructions; this didn't ruin the cake.]

With soaking the cake, I only worried that the milk would overflow the pan since my cake rose higher than the edge of the pan on one side thanks to my not-level oven. After I topped the cake with whipped cream (which also rose above the pan), I inverted a second pan over it as a cover.

The only change I might try next time would be to use half-and-half instead of heavy cream in the three-milk mixture - save a handful of calories.

One Year Ago: Fajitas 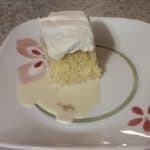 This delicious Tres Leches Cake is a sponge cake soaked in a sweet mixture of three different kinds of milk. A delightful dessert.