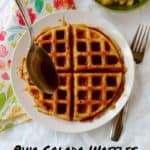 For months, I've had cans of coconut milk stored in my pantry, in anticipation of trying out these Pina Colada Waffles with Rum Sauce again. I first made them from Alton Brown's recipe 8 years ago when I did my 365 Recipe Challenge, but I've grown so much since then. My tastes have changed, and I believe I've become a much better cook in the meantime as well.

Sometimes I flip through cookbooks for inspiration, and Alton Brown's baking book, I’m Just Here for More Food (affiliate link), was one of my go-to books in 2010. I found the recipe for Pina Colada Waffles when I searched for a breakfast recipe; I ended up making Old-School Chocolate Chip Muffins that weekend, but I had to try the waffles as soon as I possibly could.

I bought the wrong kind of pineapple, so I ended up crushing my own pineapple, but perhaps not very well. I used "light" coconut milk (which often isn't as flavorful). But I know I cooked the waffles properly, at least.

I made the rum sauce too early, and overcooked it, and reheated it, which didn't do the texture any favors.

In any case, it was clear this recipe deserved another attempt, now that my tastes and culinary skills have grown.

The pina colada waffles were as straightforward to make now as they were in 2010. Simply mix together wet ingredients, whisk in dry ones until the batter is just combined, and let batter sit for 5 minutes while you heat the waffle iron. This resting period allows the batter to thicken and come together better, and will make for better waffles. This is true for just about any waffle or pancake batter that you make. 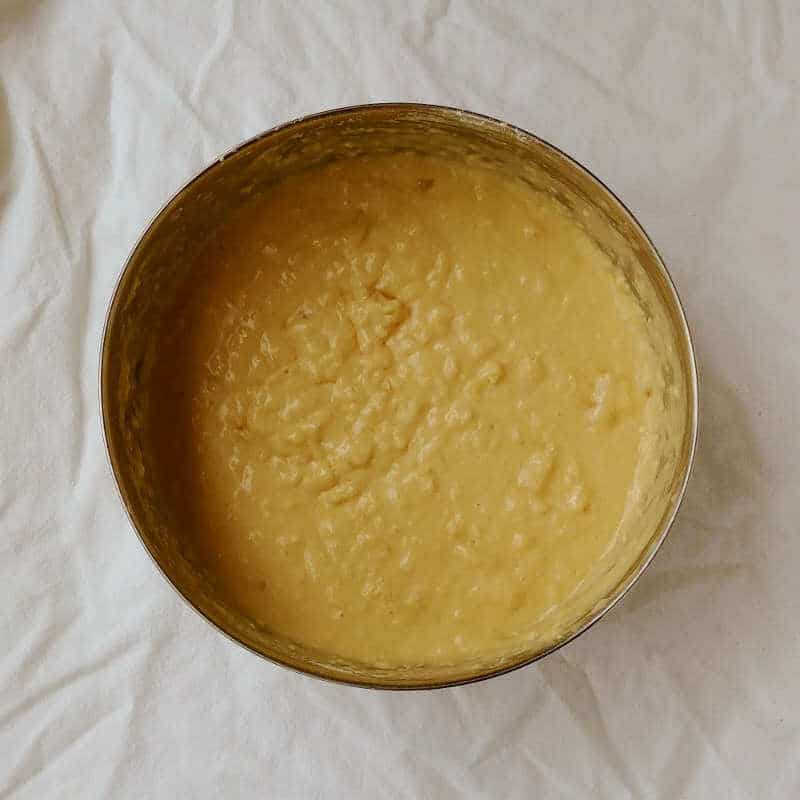 I bought the wrong pineapple since I didn't have my recipe with me when I shopped, so I still had to crush my own pineapple to add to the batter, but at least I started with tidbits instead of chunks. I used full-flavored, high-fat coconut milk (from a can, not a refrigerated carton).

I don't time my waffles when I cook them. I generally cook them until steam stops coming out of the waffle iron. (This is per my waffle iron's instructions.)

I kept the waffles warm in a 200 degree oven while I cooked the others. In fact, I think the waffles were a little better that way than straight from the waffle iron.

Rum sauce was much easier to make this time around. I knew to start it when the waffles were about done, so it would be fresh. 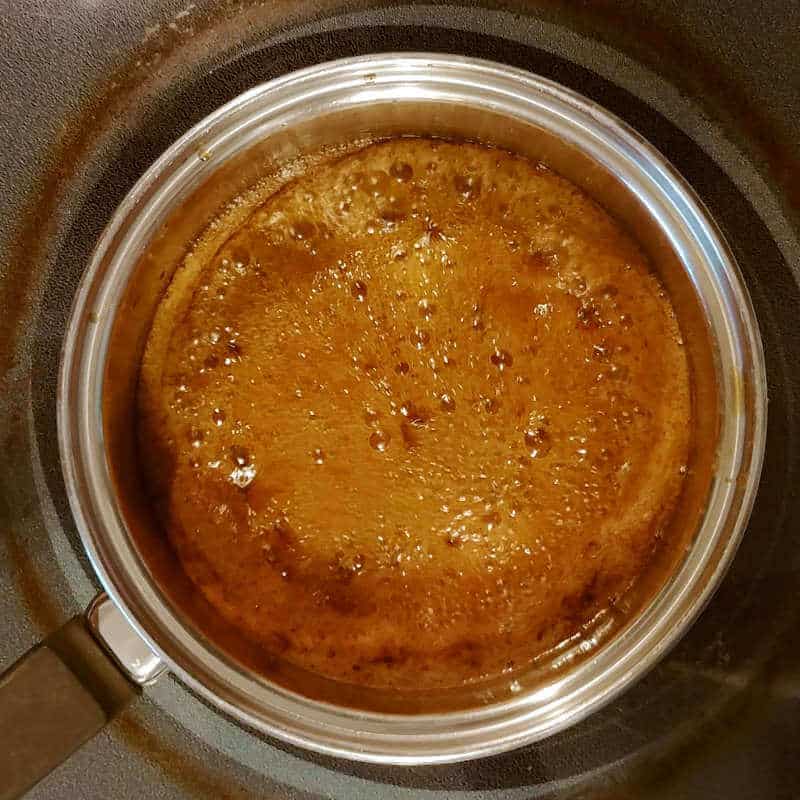 For rum sauce, just melt butter, then add brown sugar and dark rum. (I used Bacardi Anejo this time around.) Bring it to a bubble, and let it gently bubble for 5-7 minutes, stirring every now and then so it doesn't stick. You don't want it to boil, but you want it to simmer (a little less than in the picture above). The sauce will thicken up a little bit, but not very much. And then add a little vanilla and salt.

Rum sauce was delicious in 2010, but it turned out perfectly in 2018. It drizzled over the waffles well. It was also good spread on leftover waffles. It will keep for a few weeks in the fridge.

Pina colada waffles turned out much better this time around, for a few reasons.

They had a stronger coconut flavor from the thicker coconut milk, although overall the flavors of it and the pineapple were still subtle. (This was true in 2010 as well; Alex, our friend Shah who we had over for breakfast, and I didn't notice those flavors much then either.)

The waffles were definitely eggy waffles. I noticed this because I'm not a huge fan of eggs. However, it made them seem much richer than regular waffles, and helped them stand up well to the rather sweet rum sauce. 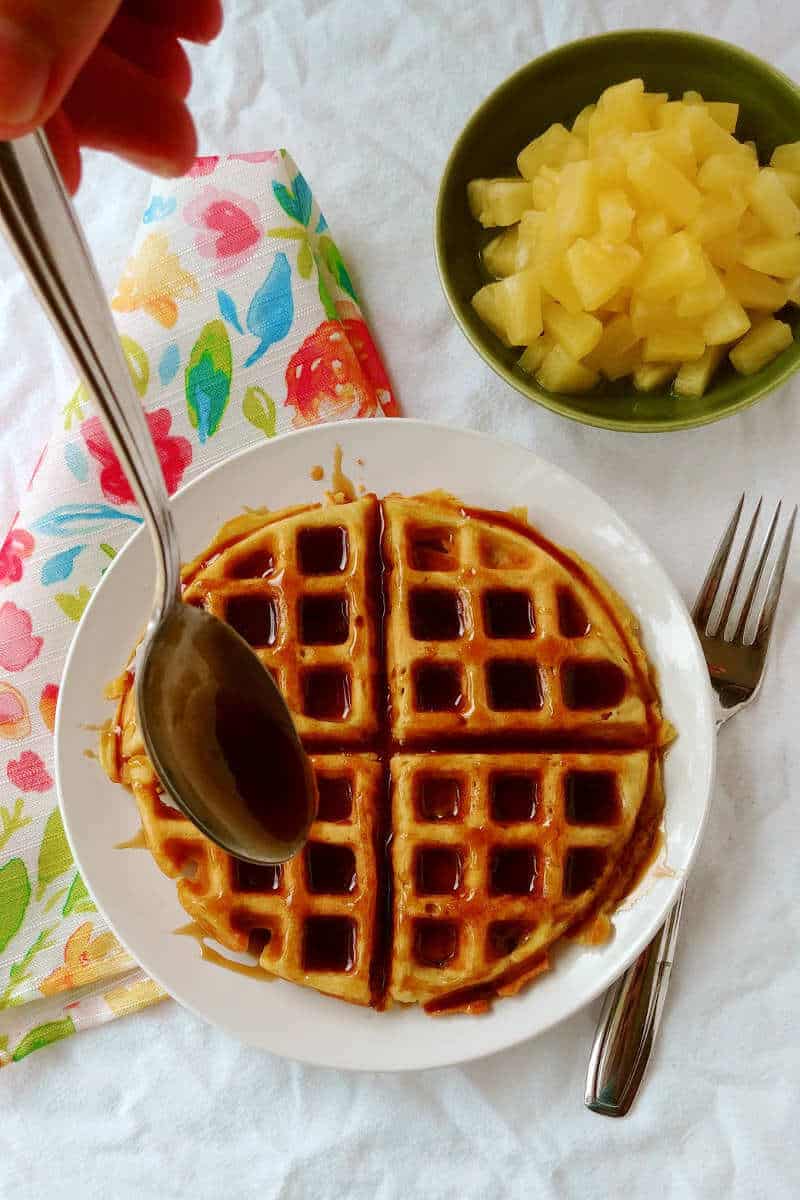 The rum sauce was super-delicious. That's where the overall flavor of pina colada came from. To get that pina colada vibe, the waffles were best served with the rum sauce than on their own or with a different sauce. The rum sauce is basically a caramel sauce, and was richer with the Bacardi Anejo than with the Captain Morgan's I used back in 2010. (Captain Morgan's was what I had in the house back then, and is really pretty sweet on its own.)

If you don't like rum, I'm sure you could substitute in whiskey or bourbon instead - but then you wouldn't quite be making pina colada waffles. You could also make a normal caramel sauce instead, or just top them with a store-bought caramel. (I fed the waffles to Amelia with caramel ice cream topping as a syrup, instead of the rum sauce.)

Overall, I liked these waffles much more than I did 8 years ago. I still look forward to finding a more coconutty version of pina colada waffles, but this one is great for its simplicity and subtlety (although there's nothing overtly subtle about the rum sauce). I'll revisit it again, and certainly turn back to the rum sauce from time to time.

One Year Ago: Sesame Noodles 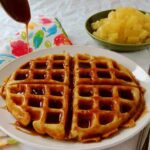 Pina Colada Waffles with Rum Sauce are summery vacation waffles. Waffles are made with coconut milk and pineapple, but the real star of the show is a quick rum caramel sauce that shouldn't be missed. 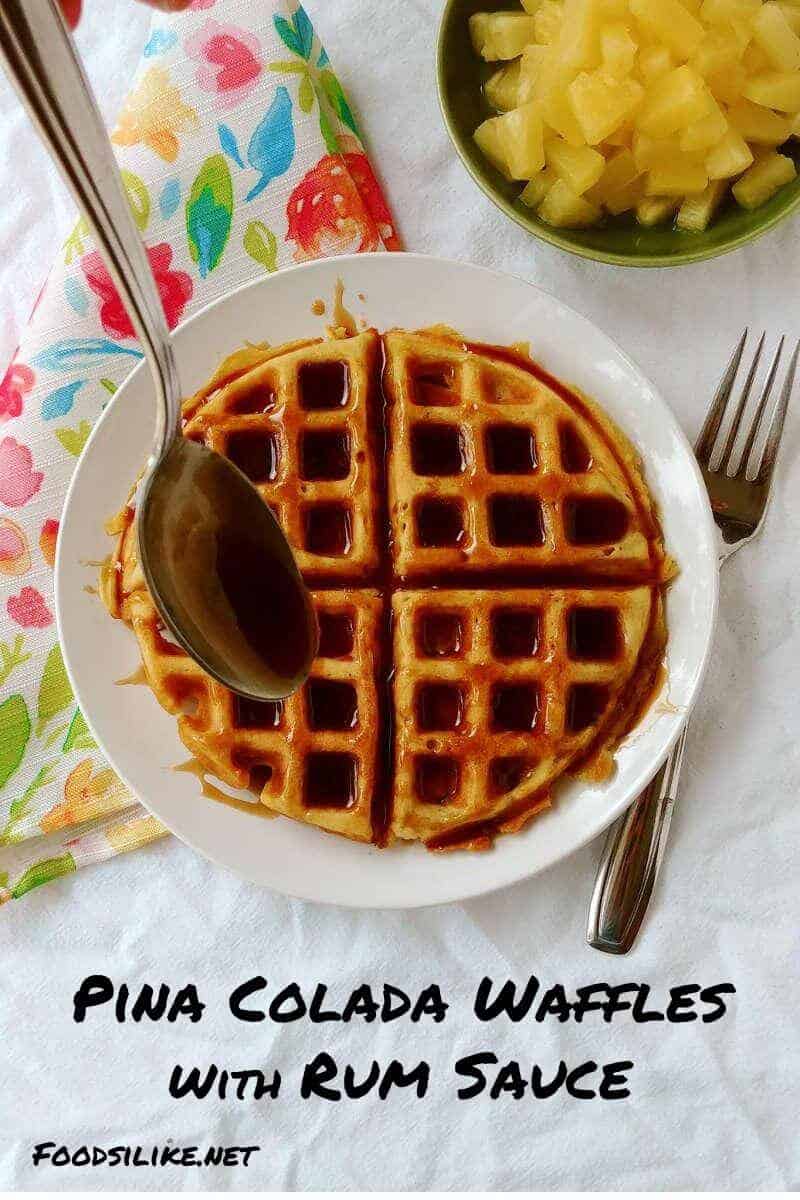