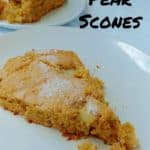 I've missed baking for breakfast on the weekends, but I happily remedied that on Saturday when I made Apple and Pear Scones. I had a pear and buttermilk I wanted to use up, and an apple to spare. Plus, I love scones.

They were tasty and easy scones to make.

This recipe for Apple and Pear Scones is adapted from Group Recipes.

Scones (at least here in the US) are made very much like biscuits. However, they have a much higher sugar content.

To make the scones, mix together the dry ingredients, then cut in your butter with a pastry cutter (affiliate link) or two knives. Your mixture should resemble pebbles or crumbs.

At this point I cut the apple and the pear so they wouldn't have a chance to brown. Toss the fruit in the flour mixture, separating the bits of fruit so they won't be clumped together.

Stir in buttermilk until the dough just comes together.

Turn the dough onto a lightly floured surface and carefully pat it into a round. You may need to flour your fingers a little; the dough is sticky. Cut it into 8 wedges, sprinkle with sugar, and separate the wedges. Place them on a silicone mat (affiliate link) or parchment on a baking sheet and bake them in a 375F oven for 22-28 minutes. (I baked them for 20 minutes, instead of 22, since my oven runs hot.)

As with most scones, they were best fresh out of the oven. They were tender and moist, and rose nicely. The scones were light and fluffy. The scones had a nice flavor thanks to the brown sugar; the apples and pears were a nice addition to the scone. With the sugar on top of the scones, they were definitely sweet, but not too sweet.

These were easy scones to make, and turned out well. I would make them again.

You can also try Fresh Apple Cinnamon Scones or search through all of my other scone recipes! 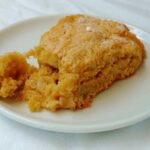 Apple and Pear Scones are delicious, and make a fine addition to brunch.

Use a firm baking apple in this. I think I used a Cortland in this.

Bosc pears work well here because they are firm and hold their shape.

Adapted from a recipe on Group Recipes