For Bread 38, I made an old favorite of mine, Big Sur Hide Bread, that could be made vegan. I've made and written about it on here twice, once in 2010 as part of my 365 recipe challenge, and again in 2012 (both of which I've incorporated here). Every time I make it, I wonder why I haven't made it more often. It's healthy, incredibly easy to make, and takes very little time overall.

When I first made this in 2010, I'd been preoccupied with bread, even though we didn't eat it regularly. We really only kept bread around to make toast for breakfast (and on occasion garlic bread to go with dinner). I don’t even eat toast that often in the winter; I prefer a bowl of steel-cut oats when it’s cold. But I do have a fondness for English muffins, and found a recipe for Big Sur Bakery Hide Bread at 101 Cookbooks that seemed both easy and tasty.

You can read my attempts at this recipe throughout the years, or just jump ahead to the recipe .

Summary of the 2010 Attempt

I made this on Thursday night after dinner. It came together pretty quickly, although I needed a huge bowl to mix it. I used Shiner Bock since it was the mildest-flavored beer I had in the house and Alex doesn’t like beer. I had promised one of the interns at work that I would make something vegan for her while she was here this year, so I used water instead of the buttermilk or milk. I pulled out my trusty plastic ruler to measure the dough’s dimensions as I shaped it. I got precisely 15 patties out of the dough, as the recipe called for.

Now, this recipe made a ton of bread. It has over 8 total cups of flour and grains in it! I made these substitutions:

I think I got a little too much flour on the outside, because they didn’t really turn golden as I expected them to. I also wonder if leaving the milk out and substituting water instead hampered the chemical reactions of the baking soda, because it seemed to me that they barely rose at all. I had to use two sheets for the bread, and while I rotated the baking sheets on the racks, I did not switch the racks that they were on. It’s possible that the air circulation simply wasn’t adequate due to overcrowding.

These were dense but very tasty. The recipe said you should split and toast these like English muffins, and they were indeed best like that. They were very sesame-y since I used extra sesame seeds, and this flavor came out particularly strongly when toasted. Unfortunately, I couldn’t really split them after a couple of days because the outside had toughened up and the bread was too thin since it didn’t rise much. They still taste good, but it’s not as good as it should be that way. I don’t eat butter, the recommended accompaniment, but it was delicious with almond butter or honey, and I’m sure peanut butter would be excellent too.

Summary of the 2012 Attempt

This weekend, I made Big Sur Hide Bread again. I first tried it in 2010 and I liked it, but I honestly wasn't quite satisfied with how they turned out. The rolls were flat (didn't rise), and incredibly dense, and the crust was too tough after the day I baked them. I didn't think there was a problem with the recipe - I thought there was a problem with my implementation of it. I liked the flavor of the rolls and I liked how quick they were to make, so I wanted to try again and do the recipe justice.

Based on commenter reviews on 101 Cookbooks, it sounded like they had similar issues as what I had previously. So, the lackluster results of my original attempt couldn't entirely be my fault, unless I just measure very heavy cups of flour. I made a few changes in ingredients, and I'm really happy with the results.

This turned out much better than before. The milk gave the bread extra tenderness that it had been lacking, and I think it helped the baking soda have a better reaction. Less flour made the rolls more tender and allowed them to rise, even though it made the batter stickier.

These were still hearty. Sunflower seeds were a dominant flavor, given the large dose of them. I really didn't notice the whole wheat flour or oat bran, although I know they made this bread pretty healthy. The rolls were good, untoasted right after baking, with a beef vegetable soup I made. I don't eat butter as a spread, but almond or peanut butter suits these rolls very well. In fact, one of these, toasted, with almond butter is exactly what I plan on having for breakfast for the next several days.

I enjoyed the crunch of the crust, but the rolls will only get more difficult to cut in the upcoming days. My plan is to split them now so that I don't have to try cutting them after the crusts further harden. Yes, that means they'll dry a little, but you won't notice it after you toast them and add some kind of spread.

In general, I'm very happy to rehabilitate this recipe. I've thought about it, on and off, for the past two years, wanting to give this recipe another chance to shine, and I'm glad I did. These are hearty, English-muffin style rolls that work well as dinner accompaniment as well as not-too-sweet warm breakfast. They're healthy and simple and quick to make, and it would be an easy recipe to halve.

Summary of the 2014 Attempt

This is an incredibly easy bread to make. It's fast to get into the oven, and you don't have to wait to eat it. It yields a lot - 15 rolls - so you get a large return on your investment of time. It's very healthy, and works well with dinner or as breakfast. 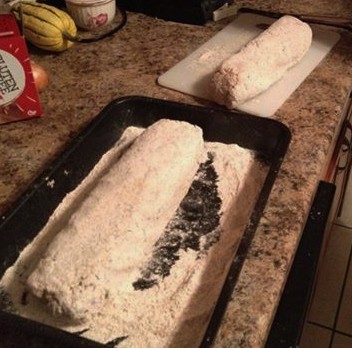 As usual, these were delicious. They were dense, hearty, and filling, perfect for toasting for breakfast and serving with jam, peanut butter, almond butter, or a mix thereof. You can omit the beer if you want (it's only 3 tablespoons), but you definitely need the milk to interact with the baking soda and to tenderize the bread. Honestly, I think this was the best version I've made yet, but if I make them again, I may increase the baking soda to see if they get a lighter and higher rise.

You should slice these within the first few days, as they get more difficult to cut in half as time goes on. Also, this makes 15 rolls, so you should definitely plan to freeze what you won't eat immediately as they will go bad. This is an excellent and easy bread, and provides you with breakfast for a long time. I encourage you to try it.

These would be delicious with some homemade No-Sugar-Added Slow Cooker Apple Butter.

Big Sur Hide Bread is similar to an English muffin, but studded with seeds! Great for breakfast. And, you can also make it vegan!