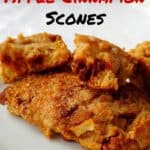 I'm apparently on an apple kick this year. In addition to sharing apple butter and apple cider donut cake with you, I've decided to reintroduce you to these sweet and tender Fresh Apple Cinnamon Scones.

It was 4, almost 5 years ago that I first made this recipe. I'd put it off for a while because these scones, unlike some, called for a brief freeze before baking them. But pre-kids me woke up early and couldn't go back to sleep, and took advantage of so much time in the morning to make them. (Waking up and not being able to go back to sleep is a facet of my life now, with a 3 year old in the house. Ah, privileged pre-kids me!)

In any case, I was very glad I'd made them then, and I'm glad that I've pulled this recipe back out now. The outsides are crisp, the insides tender, the tops crunchy with large crystals of sugar. They're sweet and appley and cinnamony. They're a great fall breakfast!

I adapted this recipe for Fresh Apple Cinnamon Scones from King Arthur Flour.

I've made a lot of scones, and it's not difficult. It's the same as making biscuits, so if you can make biscuits, you can make scones. Haven't made either? I'm here to walk you through it. I promise, you can do it!

Only mix until the dough just comes together. Gently knead the dough to work any remaining dry flour into the dough. Then turn the dough out onto a very lightly floured surface or parchment. Form it into a ball. Divide it into 2 pieces, pat each into a 5-6 inch circle, and cut into 6 wedges. Or, pat into a rectangle and cut into 12 pieces. I prefer triangles, but you can do squares instead. A bench scraper (affiliate link) works amazingly well to cut through scone dough.

Brush with a little milk or water so that cinnamon-sugar sticks to the dough, then sprinkle with cinnamon sugar.

Separate the wedges, place on a parchment-lined baking sheet (or place the parchment you used directly on your baking sheet). Then comes the worst part - placing the sheet in the freezer for 30 minutes to let the dough firm up.

Why put it in the freezer? It lets the butter stiffen, and the scones puff up more and spread less. You can skip this step if you're impatient, though.

Next, bake them and have a great fall breakfast!

With the heavy amount of cinnamon in this, and the sweetness of the cinnamon chips (affiliate link), this is a great time to add whole wheat flour. I've consistently used half white whole wheat flour in this recipe instead of all-purpose.

Cinnamon chips (affiliate link) are incredibly hard to find! I couldn't find them at Shoprite or Walmart. I did find them at Target, but only at Halloween in the seasonal aisle. You can buy cinnamon chips from Amazon for a premium. Butterscotch chips or caramel chips would add just as much sweetness, and are easy to find at grocery stores.

These scones call for applesauce instead of milk, which other scone recipes often use. I used one of my thinner attempts at apple butter in them.

How to Make Scones in Advance

Scones are great baked goods to make ahead of time!

Just make the dough, pat it out, brush it with milk and sprinkle with cinnamon sugar. Separate the wedges a little, then place them on waxed paper or parchment on a plate, and stick them in the freezer. (The waxed paper makes it easier to remove them from the plate later.) Place them in a freezer bag once they're frozen.

When you're ready to bake them, just heat your oven as usual. Place the scones on your parchment-lined baking sheet and bake them directly from frozen. No need to thaw! Bake them for 2-3 extra minutes.

I often freeze dough for scones. Since this recipe makes 12 scones, I make half of them immediately, and freeze the other half to have another morning.

How Do Apple Scones Taste?

The scones are delicious! Since the scones bake at a high temperature (425F), they get a little crisp on the outside while the interior stays tender and soft. I loved the contrast of this interior with the crunchy top - especially the large crunchy sugar crystals.

These scones are best the day they're made. You're best off baking only what you want to eat that day, and freezing the rest to bake when you want to eat the others. If you do end up with leftovers, though, you can store them at room temperature; heat them in the microwave for 5-10 seconds before eating.

Seven Years Ago: How I Like to Make Ribs in the Oven 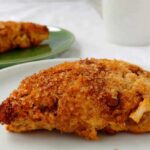 You can use apple butter instead of apple sauce in this recipe if desired.

I only found cinnamon chips at Target in the Halloween aisle. If you can't find them, use butterscotch chips or caramel chips instead.

This recipe is great for making ahead! Freeze the scones after shaping and cutting them. Bake from frozen for an extra 2-3 minutes.