This thick and creamy pureed stew is warm and wholesome, hearty and satisfying. It happens to be healthy, with sweet potatoes and lentils providing fiber, and the lentils and peanut butter providing protein. Sweet potatoes and peanut butter give it a touch of sweetness. It's spiced with cinnamon and cumin and just enough cayenne pepper to provide a warming heat without being spicy. It also happens to be vegan.

It's a delicious enough soup that when I first made it, I put off a lot of the other things I should have been doing to write about this recipe instead.

I originally made this recipe in October 2013, about four and a half years ago. Gosh, that was such a busy time. We had weddings, and work, and classes, and a running/exercise schedule, and so this poor blog was neglected. But I made the time to make this recipe for dinner the day after I came across the recipe. Making something immediately doesn't usually happen, but when it does, the recipe is usually very delicious.

Peanut butter and sweet potatoes complement each other so well, I wonder why I don't have more recipes that combine them. I have to thank Food52, from whom I've slightly adapted this recipe, for making me contemplate other peanut butter - sweet potato combinations. 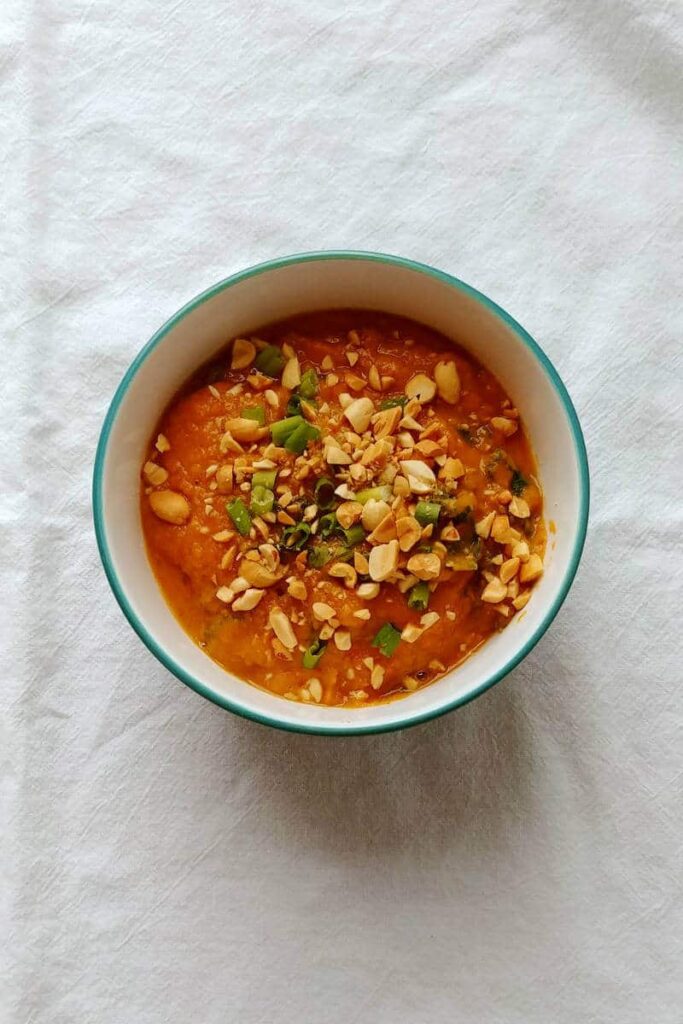 This stew is easy to make. Saute some onion and garlic, add the rest of the ingredients, then cook for another 40 minutes. Stir in peanut butter, puree the soup, and then stir in some kale. Most of the cooking time is hands off, which I greatly appreciate.

Red lentils dissolve nicely in this soup, but brown lentils work fine here too. I've used a mix of the two in the past.

I've only ever used regular creamy peanut butter (with added oil and sugar) in this soup, but I think you could use a peanuts-only peanut butter here easily. You may need to add a pinch of sugar if you do, though.

If you have a peanut allergy, I think you could easily use sesame/tahini in this soup instead. As with unsweetened peanut butter, you will want to add a pinch of sugar to balance out the flavors if you do.

Turmeric adds an earthy, base flavor to the soup. However, if you don't have access to decent turmeric, you can skip it.  If yours is really old or of poor quality, it won't really add anything. Be aware, if you use turmeric - it can stain your clothes and counters. (Sunning your clothes can often help get rid of turmeric stains in clothing, luckily.)

There's a little cayenne in this, just enough to add heat without making it hot. Adjust it to taste. 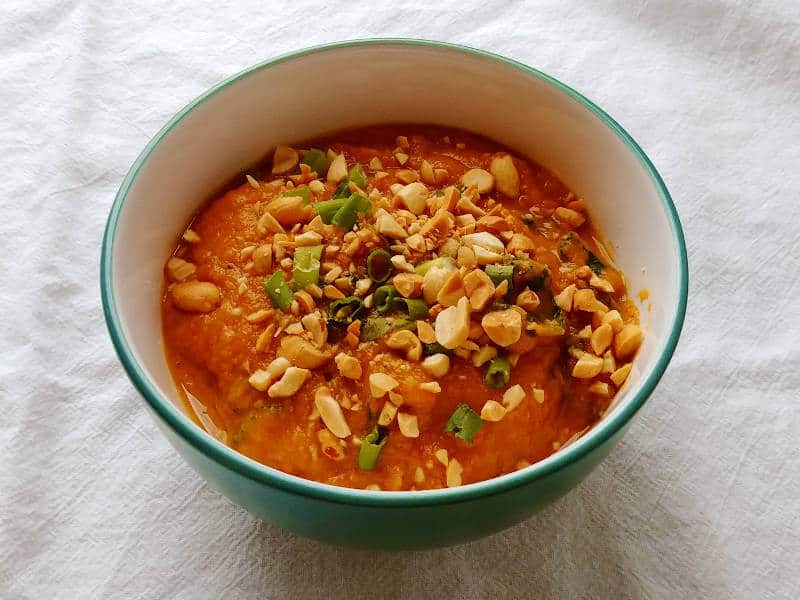 Want similar recipes? You may also like Chickpeas and Sweet Potatoes with Tahini Sauce, Lentil Soup with Lemon, or Carrot Soup with Sesame and Chickpeas.

One Year Ago: Lemon Bars 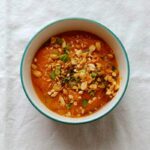 A delicious, healthy, and warming sweet potato and peanut stew. Spiced but not spicy, it happens to be vegan.

The amount of cayenne in this soup adds a touch of heat without making it spicy. Add a dash if you're very sensitive to hot-spicy food; double it (or more) if you like your food spicy.

You can mash this soup with a potato masher if desired for a chunky texture. If you do, peel your sweet potatoes before cooking them.

I have not tried it, but you can likely substitute in tahini/sesame butter for peanut butter to accommodate a peanut allergy.

(Originally published in October 2013. Updated with content, photos, and recipe.)