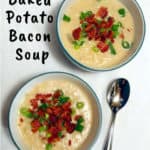 I've been thinking about this delicious baked potato and bacon soup for a while, and I finally revisited it.

I'm glad I did. It's easy to make, while being hearty, filling, and delicious. In other words, incredibly satisfying. And it's perfect for winter.

It also happens to be very inexpensive to make. When I first made this soup, I was doing rather well with budgeting and stretching our grocery money while I hunted for a job. Bacon can be expensive, but if you're lucky you find it on sale. Potatoes are cheap. It takes broth (although I use bouillon, which is less expensive) and milk, instead of cream. 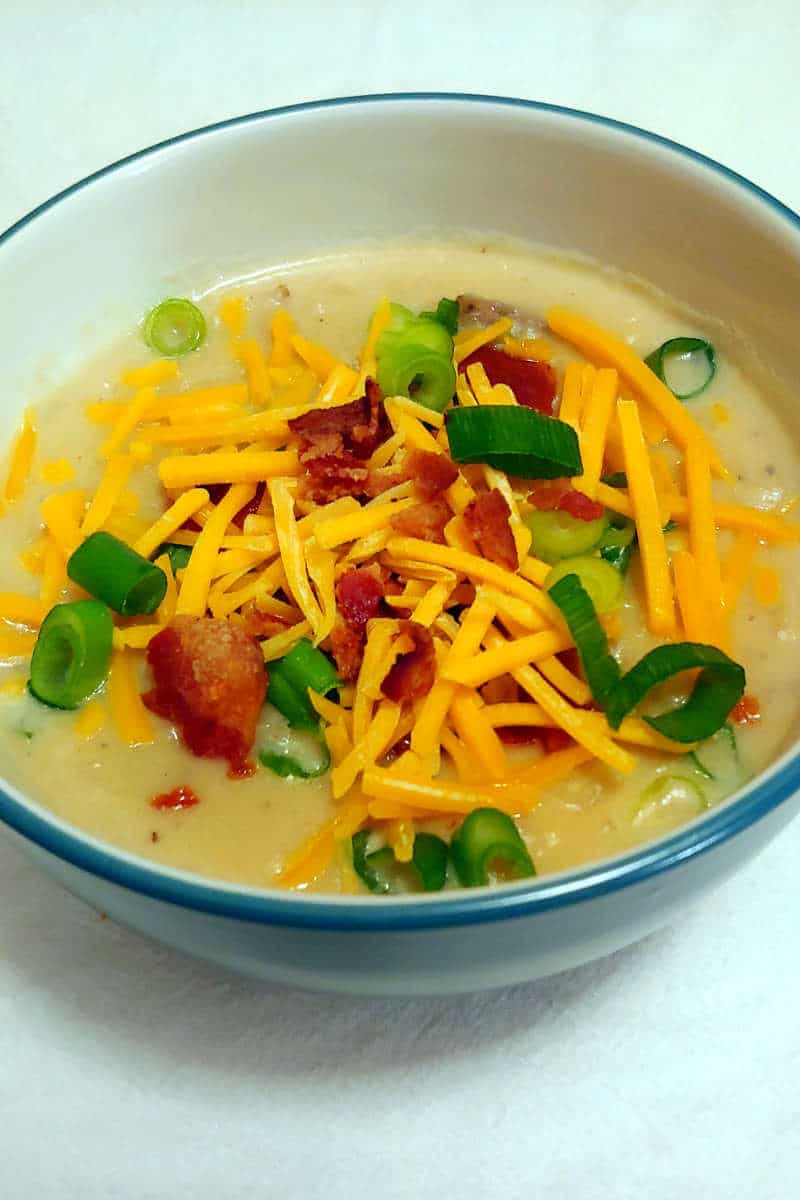 So many other recipes I found for a baked potato soup had cream cheese, shredded cheese, or sour cream added to the soup itself, rather than as a topping. I don't like any of these, so those recipes were out. (It's Alex's bowl of soup in pictures on here that have cheese.)

Interestingly, it was 7 years ago, almost to the day, that I originally posted this recipe. I wrote:

Winter has finally arrived in St. Louis. Yesterday we reached a balmy high of 56F, and Alex and I took our dog for a leisurely walk. Today, we've had a few inches of snow, and when I walked my dog, it was 17F and felt like -1.

Luckily, we usually don't get those kind of temperature swings here in South Jersey. But this soup is great, whether or not your weather is below freezing.

I adapted this recipe from the Baked Potato and Bacon Soup recipe from Cooking Light. That recipe made a ton! So I cut it in half for this (and cut way back on the onion - their recipes tend to go overboard on it).

This baked potato soup is easy to make, but it does take a little time. In fact, half of the time is just baking potatoes! This process can be sped up if you bake your potatoes ahead of time - say, over the weekend or when you're making dinner a previous day. You can also microwave your potatoes instead. 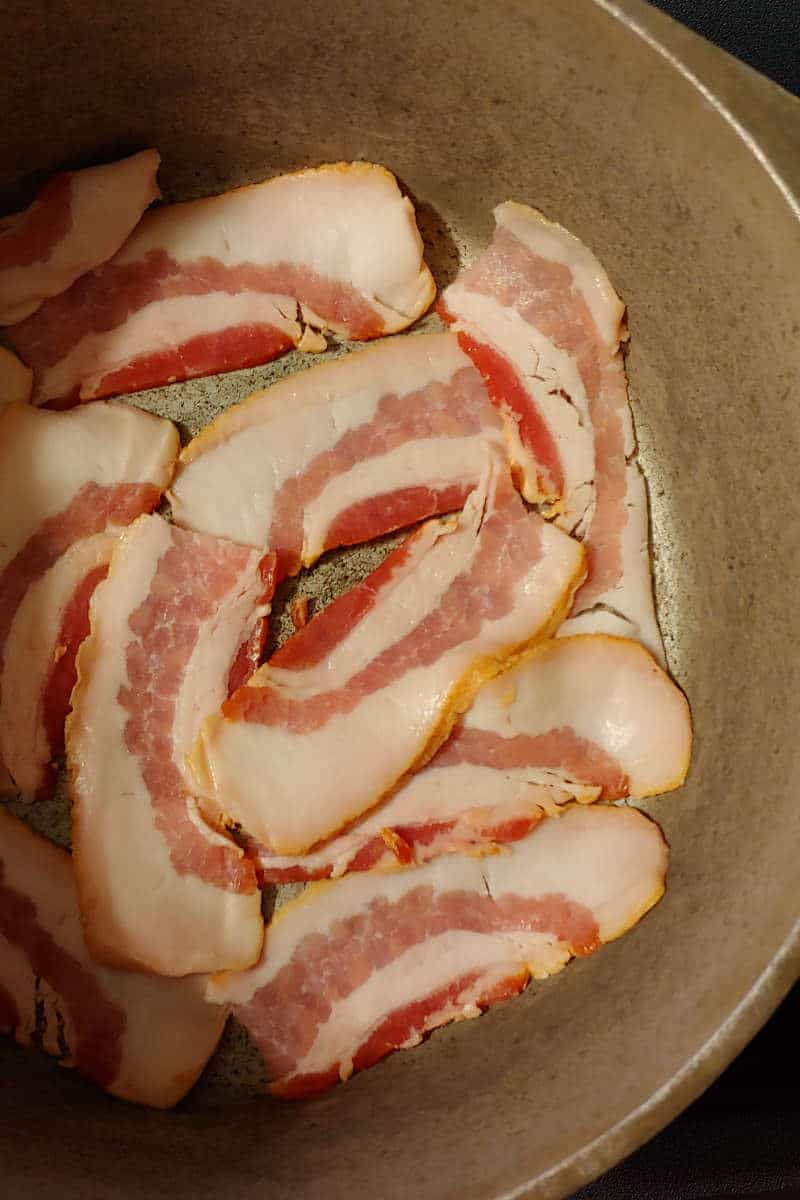 After your potatoes are cooked, fry your bacon over medium heat in the large pot you'll use for the soup. If desired, you can use leftover bacon grease instead if you have any around, and skip bacon as a topping. (You can also just melt 4 tablespoons of butter and skip the bacon altogether to make this vegetarian.) 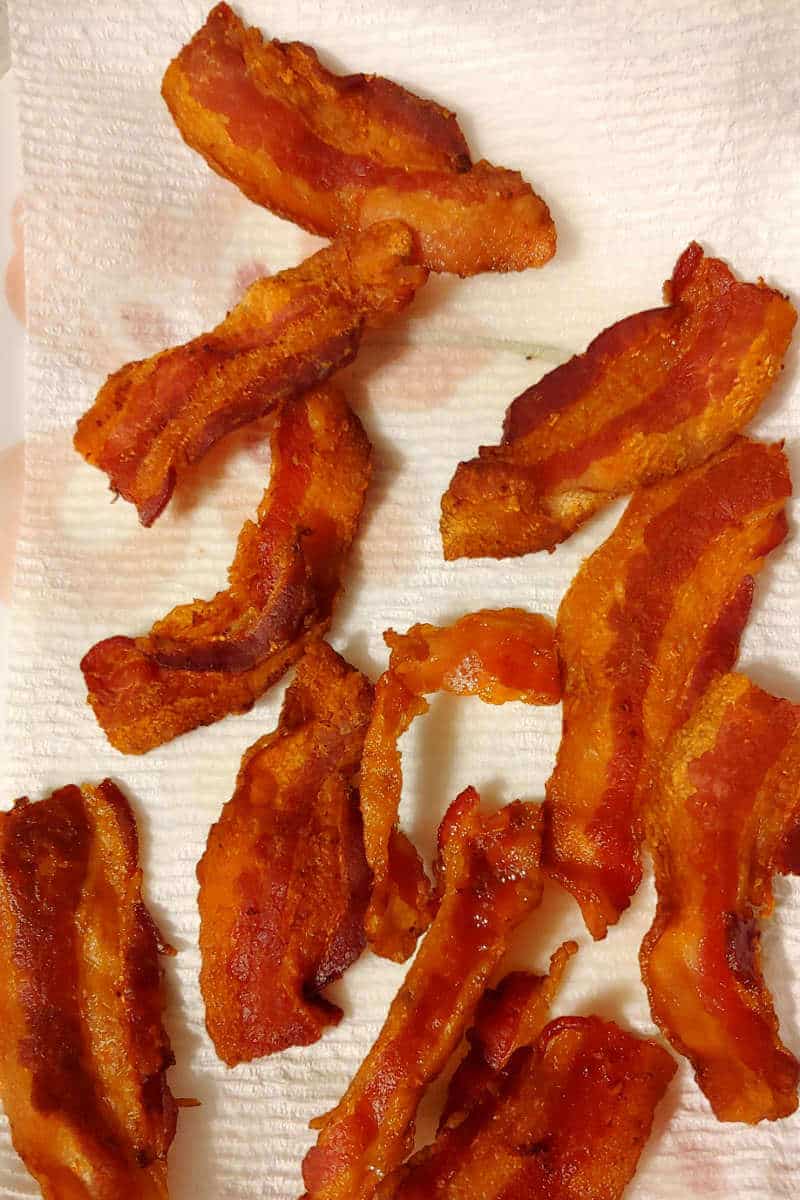 Once your bacon is done, saute the chopped onion for 5 minutes. Add the garlic and bay leaf, and cook for a few minutes more.

While your bacon and onion cooks, cut your potatoes in half and slice them. No need to cut them too small, because you will mash them later. I prefer keeping skins on for texture, but remove them if it will bother you. 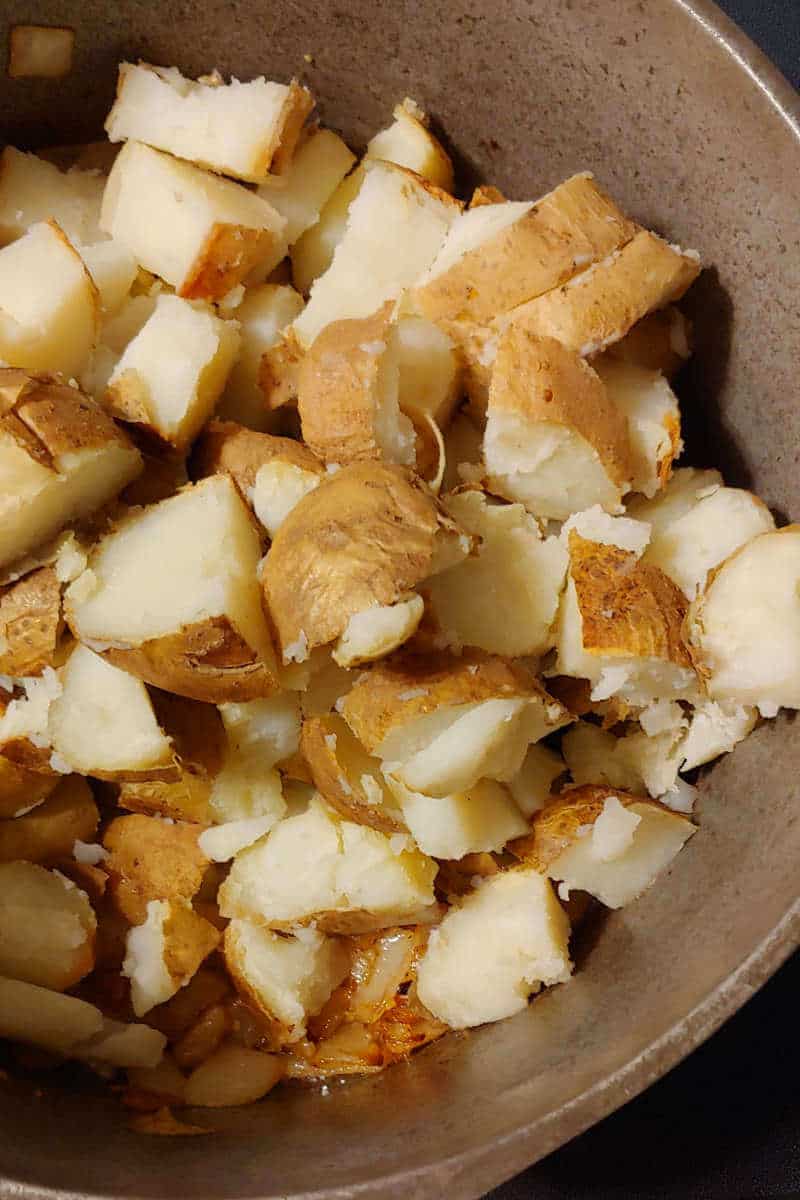 Once your onion and garlic have cooked, toss in the potatoes, milk, broth, salt, and pepper. You will want to use less salt and add to taste if you use regular broth; I always try to use lower sodium broth.

Bring the soup to a boil, then turn down the heat and let it simmer uncovered for 10 minutes. (It will be bubbling more than the picture below.) 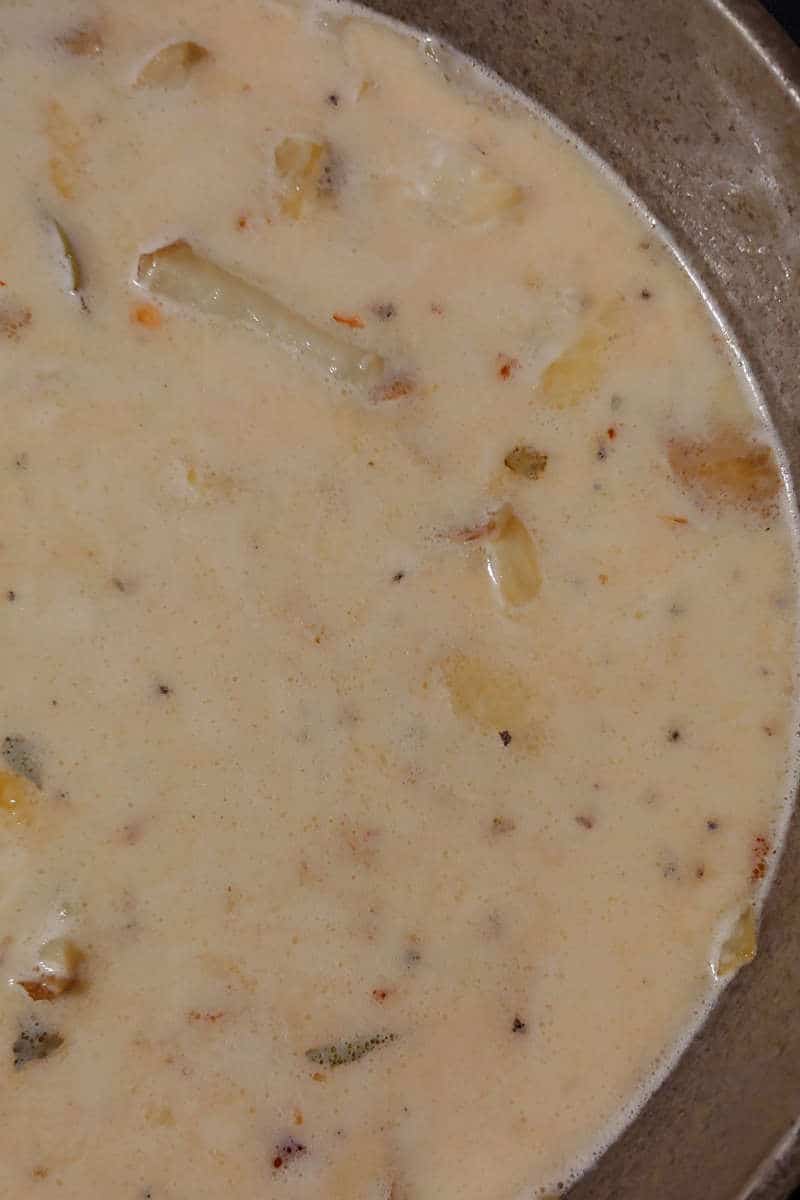 Remove the pot from heat and use a potato masher (affiliate link) to mash up the potatoes. I bet you can use an immersion blender (affiliate link) if you want it to be very smooth. However, I prefer mine chunky. Taste the soup and add salt or pepper if necessary, and add extra milk if you'd like it thinner.

What Kind of Potatoes Should I Use to Make Soup?

My first inclination is to tell you to use whatever potatoes you have on hand. If you have some already, by all means use them! However -

If you're buying potatoes, seek out some starchy baking or all-purpose potatoes. I used Russets, and I think Yukon Gold potatoes would also work well here. 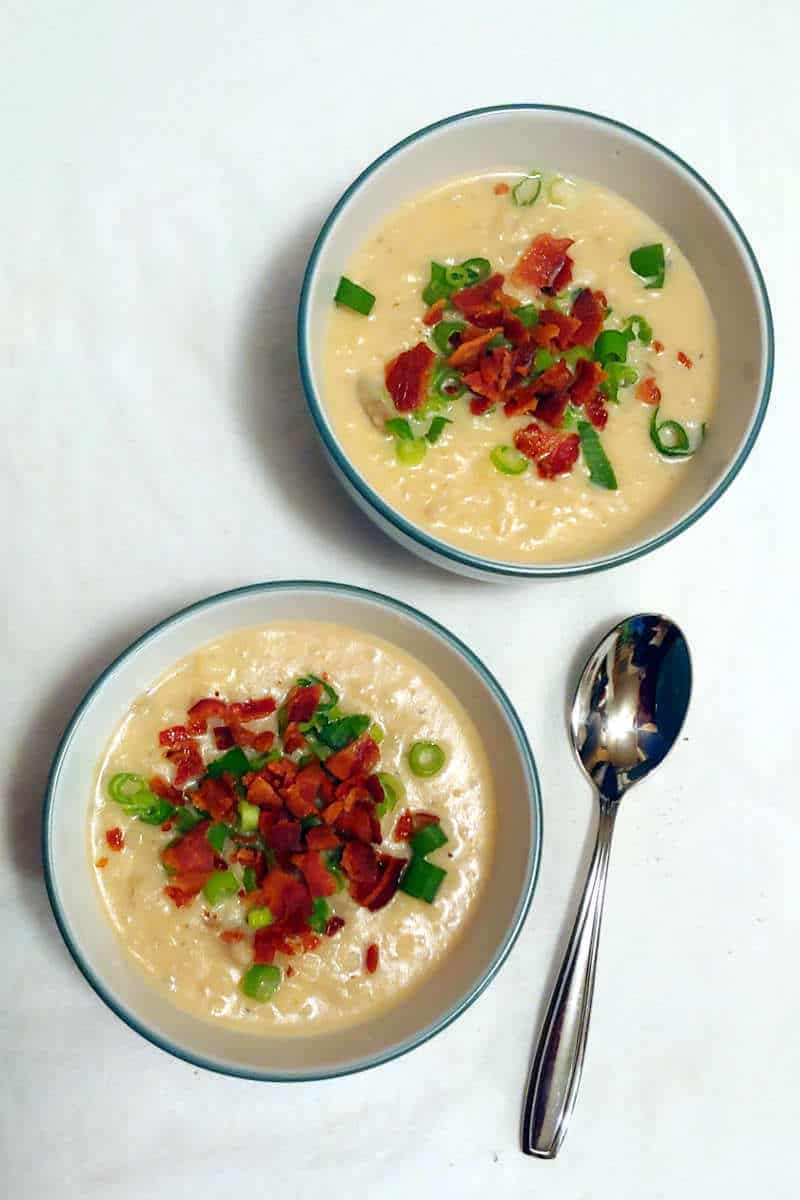 In general, you want a potato that will fall apart and become fluffy, rather than hold its shape. When you mash the soup, you want the potatoes to thicken the soup.

If you already have waxy potatoes, like red potatoes, you can use them, and the soup will still be delicious. However, realize that your soup will likely have bigger chunks of potato and the broth will be thinner; it will not have quite the same texture as if you used a different kind of potato.

To learn more about the kinds of potatoes and their interchangeability, you can read this post from Kitchn or this explanation from Cook's Illustrated.

I really love this soup. I like the simplicity of the ingredient list - potatoes, bacon, onion, garlic, milk, and chicken broth, with a few seasonings. Things I probably already have around the house.

It's exactly how I want a potato soup. It has just the right amount of onion in it. The potatoes thicken up the soup, making it creamy, but chunks of potato and skin give it texture. It has a great flavor without it being overwhelming.

Top the soup with your favorite baked potato toppings when serving. Bacon that you've reserved from frying it earlier, cheese, green onions, a pat of butter, sour cream. 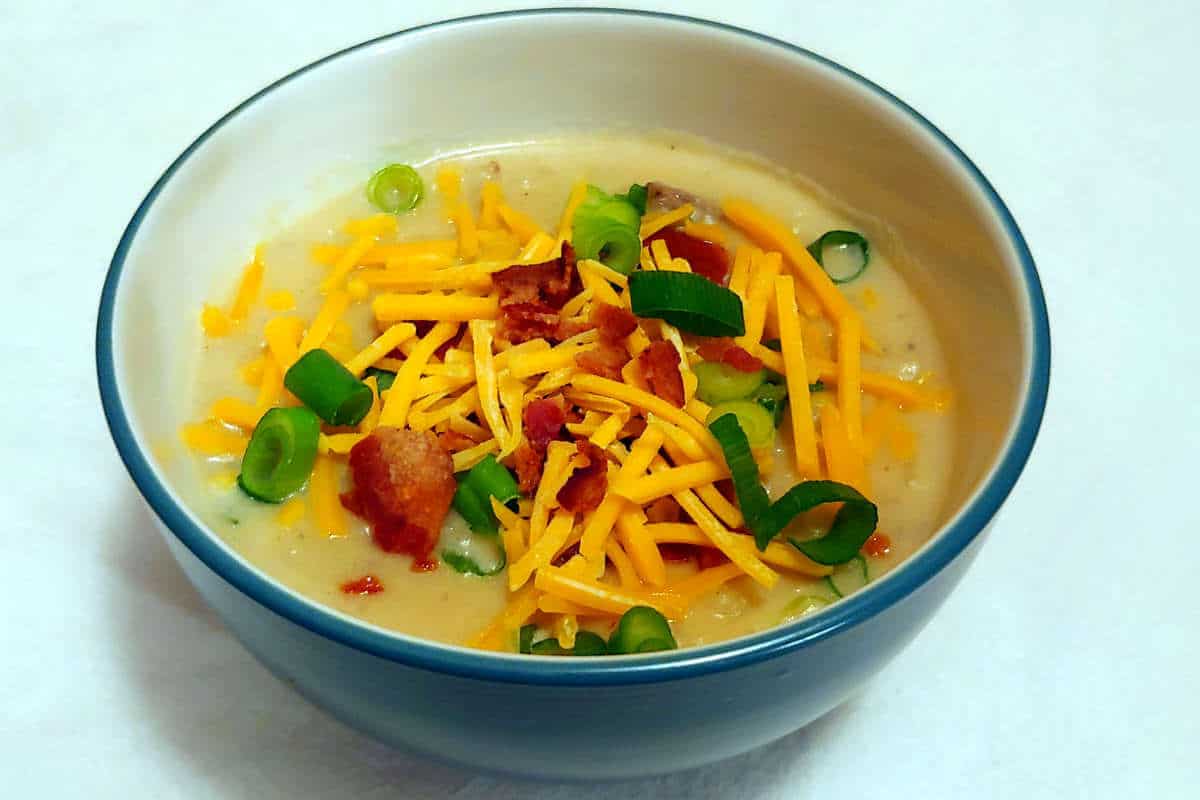 Want to go crazy? I bet it would be delicious with leftover steak or shredded beef.

I hope you like this soup as much as we do. Be sure to leave me a comment below if you try it!

Like this recipe or have questions? Rate it or leave a question/comment below!

One Year Ago: Easy French Bread 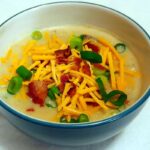 This baked potato and bacon soup is hearty, creamy, and delicious! A satisfying meal for cold winter days.

You can shave an hour off of this recipe if you have leftover baked potatoes in the fridge. You can also microwave the potatoes.

Be sure to use baking potatoes (like Russets) or all-purpose potatoes (like Yukon Golds) here; they will release starch into the soup as they cook, helping thicken it. Red potatoes will hold their shape.

To make this soup vegetarian, skip the bacon entirely and saute the onions in 4 tablespoons of butter.