I made this cake two weeks ago, and I'm finally getting around to blogging about it. A friend was in town for graduation, and that's a great excuse for a cookout. I didn't have inspiration for the grill, but I knew that I wanted to make a layer cake.

I don't actually have round or layer cake pans, so I went with an Alton Brown recipe (from I'm Just Here for More Food (affiliate link)) that bakes in a 9x3 inch springform pan. I didn't really think that the recipe itself needed frosting, but a layer cake needs frosting. Alton had a recipe for Chocolate Frosting, so I decided to make it too.

If you haven't noticed already, Alton Brown doesn't list two times for the cake, even though it goes in two very different sized pans with different surface areas. This should have raised a flag with me, but I didn't even think about it until the hour of baking was up. If I had, I would have done a little searching online, which wouldn't have turned up anything specific to this recipe, but it might have given me a better idea of how long to expect.

After an hour, the center was still incredibly wobbly and wet looking. For fear of over-baking, I started checking it every five minutes, pulling the cake out and putting it back in the oven. This was a very long extra 15 or 20 minutes I spent, and once the toothpick came out clean... the center had collapsed, either from too much motion or too much temperature fluctuation. My fault, but still very disappointing.

I let it cool for 15 minutes and removed the side of the springform pan to let it cool completely. The next day I sliced it down the center as best as I could, and frosted it.

I have a bad habit of over-whipping cream, and I came awfully close with this. The frosting was definitely delicious, though. Since my cake was sunken in the center, I decided to use some strawberries to fill in that hole.

I do think this made a very pretty cake. I was very disappointed that it fell in the center, and I wish I had a more accurate baking time to tell you.

This cake was really pretty dense and moist. I like moist, but I think that when I had this cake I wasn't really in the mood for dense. The flavor was good, but I'm not used to Ghirardelli chocolate, or chocolate (rather than cocoa) in general. Everyone seemed to really enjoy the cake, but I was underwhelmed, perhaps because I haven't been in the mood for chocolate recently. I will try it again, though, perhaps as 24 cupcakes (baked for 15-20 minutes at 350F).

The frosting was excellent, and was pretty easy to make. I highly recommend it when you want to make a chocolate frosting! 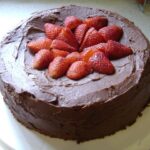