Homemade marshmallows are one of my favorite things to cook. You take ingredients that aren't exciting on their own - corn syrup, sugar, gelatin - and turn them into something magical and completely different from what you start with.

Plus, they're really pretty easy. I think they're the easiest candy you can make from scratch.

I originally tried two recipes when I started making marshmallows - Alton Brown's, and King Arthur Flour's. Alton Brown's was fine, but he included cornstarch in the coating and that created too much of a crust. He also whipped them an incredibly long time. King Arthur Flour's was less fussy and turned out much better, and is where I've adapted my recipe from.

In the 7 years since I made my first batch, I've made at least two batches of marshmallows a year to give to my friends and family as food gifts. Last year I made four! One batch is always chocolate chip marshmallows. The other is always this vanilla version. I love the vanilla ones for floating in hot chocolate, whereas the chocolate chip ones are perfect for eating. (Chocolate chips end up at the bottom of your hot chocolate mug if you use them for that.)

Each year, I wonder if I should fancy up my marshmallows. Should I try peppermint? Should I add food coloring (which would confuse people if I didn't make them flavored)? Should I decorate them? Should I cut them into fun shapes? But I don't. I like them too much as they are.

Ingredients for marshmallows are simple: sugar, corn syrup, vanilla, and gelatin, plus a little water. People like to avoid corn syrup, but marshmallows are all-sugar treat anyway, so it doesn't bother me. You could try honey, agave, or golden syrup instead, but they will likely add a different flavor, and I haven't tried them.

Gelatin: I've always used the powdery Knox brand in these, or a generic brand if I find it. I have tried a vegan, agar-agar based marshmallow recipe before; it did not turn out, dramatically. I also expect other thickeners will not work.

One box of gelatin will be enough for one batch of marshmallows, with one packet of gelatin leftover. (If you find you love making marshmallows, you can order a giant package of gelatin (affiliate link) from Amazon, like I did; the dates on it should be good for a couple of years.) 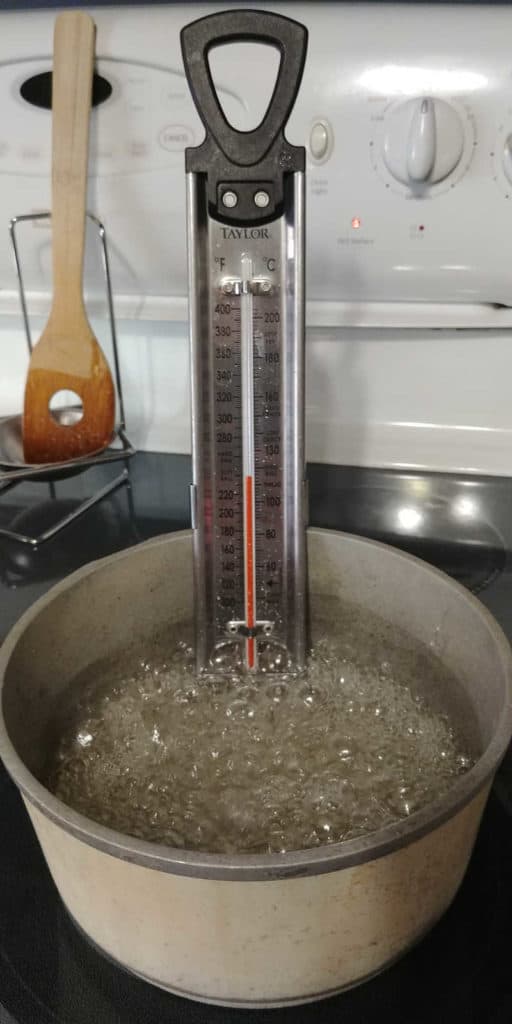 Since marshmallows are a confection, you need a candy thermometer (affiliate link). I like mine, pictured above, as it rests safely on the bottom of the pan without the bulb touching the bottom. You'll need an electric mixer to whip them up; I've always used my stand mixer, but I expect that you can use a handheld one as well.

To make marshmallows, you boil sugar, corn syrup, and water until it reaches the soft ball stage of candy, around 240F. Pour into softened gelatin, and whip for a while with an electric mixer. Add vanilla, then spread into an oiled and powdered sugared-pan, and let rest for several hours or overnight to firm up. Cut and enjoy. I've used a pizza cutter in the past, but I used my bench scraper (affiliate link) to cut them relatively evenly this year.

I store marshmallows in tins lined with waxed paper. Homemade marshmallows last for at least a month. The powdered sugar on them may give them a little crust, but they're still soft and delicious. Longer than a month, they will dry out, but they will still be pretty tasty in hot chocolate.

Marshmallows will go bad if exposed to moisture or heat. They ship well enough; make sure they are dusted well with powdered sugar so they don't stick to your packaging. I think they are my family's favorite food that I send them. 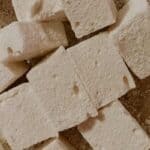 Homemade marshmallows are so much better than prepackaged, store-bought ones. They are easy to make; you just need a little time. They will need at least 4 hours to cool and set up.

A candy thermometer is essential for this recipe.

I've always made homemade marshmallows using a stand mixer. You should be able to use an electric handheld mixer, but you will have to mix for longer, and they may not be as fluffy.

For softer, creamier marshmallows, you can try to cut the gelatin back to 2 packets. However, I have not tried this.

Try dusting with powdered sugar blended with cinnamon or cocoa powder for a variation. You can add peppermint or other extracts, or crushed candy canes if desired.