This Slow Cooker Southwestern Bean and Barley Soup is a delicious and easy vegetarian meal. It's been too long since I made it, and I'm so glad I tried it again!

I originally wrote about this recipe in 2010 - it was #337 of my 365 recipe challenge. As with many delicious recipes, I put it aside, forgot about it as I continued to seek out new recipes that I could share. But now, in 2018, I'm trying to reexamine all of the great recipes I made when I first started this website.

As I mentioned in January, I'm also trying to revitalize meals - trying different recipes to make dinner more exciting for me again.

This is a great cold-weather soup with the heartiness of the barley and the earthiness of the beans. It's warming and filling, but not particularly spicy.

There's a couple of things I love about this soup. First and foremost is how easy it in. You spend 10 minutes combining all the ingredients in the slow cooker, and then you have dinner in a few hours, with no other work on your part.

The second great thing is that it's healthy. It's full of fiber, with all the beans and the barley.

A third wonderful thing is that it's inexpensive to make. Dried beans and barley do not cost very much. This recipe takes 3 kinds of beans, but it's successfully made with just one or two.

As I said, I originally tried this recipe in 2010. Southwestern Bean and Barley Soup was a part of a recipe section from Eating Well magazine on food gifts that you could make. I make food gifts for friends and family each year, and I decided to try this soup mix as something different from the usual sweets that I send. But first, I had to try it myself.

The soup mix was simple to make. It was layers of oregano (mine was Mexican oregano the first time), cumin, and chili powder, with layers of black beans, barley, Northern Beans, and kidney beans. When it comes time to cook it, you can make the soup on the stove or in a slow cooker, which is how I decided to cook mine.

This is a delicious and versatile soup. You can use one or two kinds of beans, instead of three; I used light red and black beans in the photographs above. (It thickens up; pictures above are leftovers.) I usually use chicken bouillon in it, rather than broth. When I use lower sodium chicken bouillon, the soup needs the salt added at the end.

You can garnish with whatever you would like - lime and cilantro, tortilla chips, radishes, shredded cheese. But honestly, I preferred it earthy, without any kind of garnishes.

Some reviews on Eating Well said that this wasn't a very flavorful soup. I disagree. It's hearty and earthy, and not spicy; it's not supposed to be bright. However, I think you could double any of the spices if you'd like. You can also add a can or two of diced or crushed tomatoes if you think it needs something.

Four Years Ago: Pain a l’Ancienne 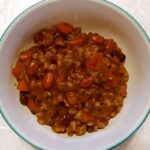 Print
Slow Cooker Southwestern Bean and Barley Soup
Prep Time
10 mins
Cook Time
4 hrs
Total Time
4 hrs 10 mins
This delicious and healthy soup is versatile; it can be made as spicy or not spicy as you want. You can cook it in a slow cooker or on the stove.
Course: Main Course
Cuisine: American
Servings: 5
Author: Leona Konkel
Ingredients
Instructions
Slow Cooker Instructions
Stove-top Instructions
Recipe Notes

I prefer this soup as it is. It's dark and rich and earthy, and not very spicy. It thickens up the next day.

Some of the reviews on Eating Well have complained that they would like it zestier. Feel free to double the spices or add tomatoes. You could also add peppers (hot or bell).