I've attempted many white bean soups in the past, but none so delicious as this Bean and Bacon Soup. I look forward to eating it and its leftovers, something I can say about none of the other bean soups I made in the past.

It has simple, inexpensive ingredients - a bag of dried beans, part of a package of bacon, a bunch of greens (though sometimes I use frozen peas and carrots). Although I start it by cooking bacon on the stove, the bulk of the cooking happens in the slow cooker, making it a perfect meal at the end of a cold and busy day.

Although it's great in winter, I first created this soup last summer when I received a bunch of collard greens in my farm share box. I would love to tell you that I'm sharing a family recipe from the South, but no. I grew up in Arkansas, but I know little about Southern cooking that I didn't read somewhere.

However, I know that collard greens, cooked with pork, are a thing. So I knew that I wanted to cook them for a long time with bacon.

I also remember how much I enjoyed bean and bacon soup as a kid. You know, the Campbell's Bean with Bacon soup (affiliate link) from a can, which you diluted with water. I loved that stuff, all those soups. They're too salty for me now, but I can still kind of get behind the bean and bacon variety since bacon is already salty.

I don't buy canned soup now, in part out of principle (I can make anything! I often think). I also took cans of soup for lunch a little too often when I worked in an office, so I'm pretty done with it.

Although I don't care much for canned soup, I adore homemade soup. I love how soup gives leftovers. I also like how inexpensive it is if you skip the meat and use beans and veggies, like with this soup. And I love how warming and filling soup can be.

I've always liked the concept of ham and beans. I didn't have luck making it; I never added enough ham, so it was never flavorful. Luckily, I don't have that problem here.

The secret is bacon.

You can cook your bacon however you'd like. Although I often bake bacon, I prefer to fry it here since you'll be using the grease to cook the onion and other vegetables.

Lay your bacon in a large, cold skillet. Place on the stove and cook over medium heat until the bacon is crispy. (I prefer to cut my bacon in half before cooking it because it fits better and is easier to flip.) Remove the bacon from the skillet and set on a plate to cool.

Have some bacon grease already stashed away in the fridge from cooking bacon some other time? (If not, start saving it to cook with!) Use about 4 tablespoons to cook the onion and other vegetables in.

Don't want to fry bacon? (Or don't have bacon grease?) This may not be the right soup for you. A lot of the flavor comes from the bacon. You can try substituting olive oil for the bacon grease.

Next, saute your onion, celery, and carrots in the bacon grease for about 5 minutes, until the onion becomes translucent. (I forgot celery in the picture above.) Add the garlic, and cook briefly.

I usually use bouillon and water, because it's easy for me to keep on hand, and less expensive than broth. If you prefer to use broth, add 4 cups broth and use only 4 cups water. Both chicken and vegetable broth work fine here.

Cover the slow cooker and cook everything on low for 8 hours. Longer will be okay if you are leaving it all day while you're at work, although the beans may become very soft. I often cook it on high for 2 hours, and low for another 4, when I don't get it cooking as early as I mean to.

When the soup is done, give it a stir and a taste. Add pepper and extra salt as necessary.

How to Serve Bean and Bacon Soup

This combination of some bacon, a pound of beans, and a bunch of greens makes a healthy, inexpensive meal that gives you leftovers for days. The bacon gives it hearty flavor. The greens cook down and become silky. The beans provide body to the broth.

This soup is rather light (though filling!), so you can serve it with something hearty.

A traditional side dish for ham and beans (which this is very much like) is cornbread. A basic cornbread is easy to make from scratch! Or, make cornbread from a mix if you'd like.

Not a cornbread fan? Any kind of crusty bread would be nice on the side. Maybe an easy French bread?

Leftovers of this soup are delicious and reheat well. It's a soup that warms you up and fills you up, perfect for cold winter days. And it's ideal for a busy day's dinner. Just 30 minutes of prep, hours in the slow cooker, it's ready to eat when you get home!

I hope you love this soup as much as we do.

One Year Ago: Fennel-Crusted Pork Loin with Potatoes and Pears, Roasted Chickpeas and Sweet Potatoes with Tahini Sauce 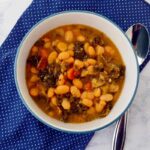 Easy and delicious Bean and Bacon Soup! A slow cooker meal, perfect for busy or cold winter days. This warming and healthy soup is comforting and satisfying, and makes great leftovers!

When I run short on time and am home to adjust the temperature, I often cook the soup for 2 hours on high and 4 hours on low. You can also try cooking on high for 4-6 hours.

I never soak my beans, as my slow cooker cooks them well. If your slow cooker doesn't cook beans well, soak your beans overnight in 4 cups of the water. Put all the beans with soaking water into the slow cooker.

I've tried both collard greens and kale in this soup; both are delicious. Not a greens fan? Make this soup with a bag of frozen peas and carrots instead, adding it in place of the greens. No need to thaw.

No slow cooker? Try using an Instant Pot! You can use the slow cooker function, or try cooking it using the beans setting.