I'm a little behind the times on making Ginger-Pumpkin Pie with Toasted Coconut. Pumpkin pie belongs in the fall, in October and November as you prepare for Thanksgiving and cool temperatures. It's not my family's tradition, but you might even spring for a pumpkin pie at Christmastime.

I actually don't like pumpkin pie too much. Pumpkin doesn't have much flavor to me, so it's really about how the pie is flavored that matters. It's clovey and heavy with spice, and I just get tired eating it. I was drawn to this pie by its promise of different spices. This pie is flavored with a lot of fresh grated ginger, a little cinnamon, and a little allspice. It's sweetened with brown sugar and sweetened condensed milk, which also replaces the usual evaporated milk that goes in pumpkin pie.

I saw this recipe at the end of November and wanted to try it, but as you can see from my recent entries, I've been busy with plenty of other desserts and just hadn't gotten around to it. I even bought pie shells (since I've felt too lazy to make homemade crusts) that have spoken to me every time I open the freezer - "hey, I'm still here - you should make a pie!"

The can of pumpkin and sweetened condensed milk that I saved for this pie talked at me too. I gave in this week, and I'm glad I did.

Assembling the pie was easy - or at least, it should have been. You're supposed to buy premade pie dough, not crusts, so that you can put it in your own nice, deep pie pan. Since the recipe didn't specify a deep dish pie, I bought the regular frozen pie crusts since Target didn't have pie crust dough. The pie pan was too shallow to hold all of the filling. I filled up pan as high as I could, and poured the remaining pie filling into a mini-loaf pan.

I had pre-baked the pie crust for about 5 minutes before I filled it. I baked the shallow pie, on the bottom rack per the instructions, at 375F for about 40 minutes, until I was satisfied with how clean the knife was when I inserted it in the pie. I think that if I'd made the full, deeper pie, I would have needed to bake it a little longer. I baked the mini-loaf of pie filling about the same time.

I finally found a pumpkin pie recipe I like! It was creamy like pumpkin pie should be. It was bright and spicy from the ginger, rather than heavy like pumpkin pie usually tastes to me. The ginger really brought out the pumpkin flavor rather than hid it behind heavy spices. It was delicious with toasted coconut and with whipped cream, but I think that both are optional rather than strictly necessary. I really enjoyed this pie, unlike other pumpkin pies I've made. This'll be a recipe I make again. 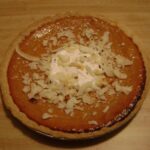