This year I decided I wanted to make a King Cake for Mardi Gras. Not that Alex and I do anything to celebrate Mardi Gras or give anything up afterward - it's just a fun excuse to bake something delicious.

There are a few recipes out there that include fillings and such, but I decided to use this recipe, primarily because it seemed uncomplicated. (After all, it's Sunday and I didn't feel like making anything difficult.) I made this yeast-risen cake in my stand mixer, just like I do all other bread I make.

I heated milk (2%) in the microwave and added it to sugar, a lot of yeast (2 tablespoons), and a little flour in the bowl of my stand mixer. I stirred it well and let the yeast proof while I prepped the rest of the ingredients (which consisted of melting 2 sticks of butter in the microwave and separating 5 egg yolks). The milk wasn't too warm, so I added the egg yolks directly to the milk mixture and stirred (using the dough hook) on medium to mix/temper the eggs. I drizzled in the melted butter, vanilla, and ¼ teaspoon lemon extract (instead of lemon zest). I added cinnamon and the rest of the flour. I wanted to add nutmeg, but I couldn't find it in my kitchen. I kneaded the dough with the stand mixer on low for about 5 minutes, until it was smooth and elastic. This dough had enough butter in it that I didn't need to grease the bowl I put it in to rise.

The dough rose in a warm oven for about an hour to be nice and doubled in size. I weighed the dough into 3 equal pieces and rolled them out to equal lengths. (They might have been 16 inches in length, but I didn't measure.) I braided the dough together. Starting in the middle of the strands, I brought the right strand over the middle, and then the left strand. Once done on that end, I returned to the middle and moved the right end under the middle, and then the left strand under the middle, until the dough was braided. I crimped the ends, and then transferred the braid to a pizza sheet where I turned the braid into a ring. I tried to seal the ends together, but it didn't work very well. I covered the dough with plastic wrap and left it on the preheating oven to rise until it doubled again.

30 minutes later, the bread went into a 375F oven for about 25 minutes, at which point the bread was very browned. The cake smelled great as it baked - warm and cinnamony. I let it cool for about an hour before it was completely cooled.

Frosting - I mixed together 2 cups powdered sugar, 4 tablespoons milk, and a little vanilla. (I should have used 3 because the frosting was runny.) I drizzled on most of the frosting, and reserved a little. I took half of the reserved frosting, added more powdered sugar to make it thicker for streaking, and added food coloring. I meant to go gold, but accidentally added a drop of red, which made the frosting very orange. I repeated the process to make purple, which turned a nice but not bright shade of purple. I streaked the colored frosting on the cake, and covered it with green sugar crystals. I did NOT hide any baby, bean, or trinket in my cake.

The cake was a lot like a cinnamon bread or coffee cake with frosting. It had a light, flaky texture. It was not particularly sweet if you had a bite without icing. It was lightly cinnamoned, but I had to try hard to notice the lemon extract I added. I think it would have been excellent had I been able to find my nutmeg.

The King Cake was tasty, and much easier to make than the paczki I made last year. I want to say that I like the paczki better, but it may be more appropriate to say that they satisfy different sweet tooths - donuts versus coffee cake. I think the King Cake makes a better presentation, and it definitely looks more festive. I'd never had King Cake before, and I have a feeling it will grow on me. I bet I'll begin to like it more and more as I eat it this week. 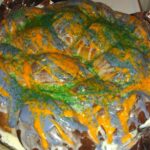 Adapted from New Orleans, the Cookbook via Epicurious