Schnucks had boneless pork shoulders on sale for a while, so I stocked up. One of the things I wanted to do to one was make Soy and Cola Braised Pork Shoulder. I bought a bottle of full-sugar cola because I wanted to try this recipe - and if you cook with soda, you can't use the diet stuff that I normally drink. You need the sugar/corn syrup from the soda for the recipe.

The recipe is simple. It says to use a bone-in pork butt, but I prefer boneless. You sear the pork roast in sesame oil. Remove it from the pot so you can add garlic and ginger, followed by the cola, hoisin sauce, soy sauce, and rice vinegar. You return the pork to the pot, put a lid on it, and braise it in the oven for about 2 hours, turning the pork roast occasionally so it all gets a chance to cook in the liquid.

At this point you remove the pork from the oven and from the pot. You strain off rendered fat, and simmer the remaining liquid to reduce it to about 2 cups (I guessed to reduce by half, which would probably be a little too much, now that I think about it).

Straining off rendered fat is difficult if you don't have a specialty devise. I originally thought I could do it with a zipper bag... until that bag unsealed in the sink, draining away all our delicious sauce. That pork shoulder was delicious, but dry without the sauce. I tried the recipe a second time. This time, I cooked the food one day and refrigerated it overnight so the fat solidified and was easy to remove before reducing the sauce. Much better! I shredded the pork and returned it to the thickened sauce, then added some green onions to it.

This pork was delicious. It was sweet and salty, with tang from the vinegar. The green onions were nice in it, and I especially liked the way the pork and sauce mellowed when paired with the fresh taste of cucumber. I enjoyed the pork over rice, since the rice soaked up some of the sauce. This was an easy recipe; you need some time to make it, but it's low-maintenance to make. I'd try it again, and maybe I'd try to adapt it for a slow cooker. 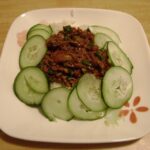