For our Super Bowl party, I made another stadium cake. I've done a vanilla one twice, but this time I decided to switch it up by making a chocolate stadium cake. I wanted a chocolate pound cake recipe, but ultimately decided to make the Star Spangled Cocoa Bundt Cake recipe from Hershey's, even though it's not a pound cake. [I think it's called "star spangled" because it's filled with strawberries and blueberries, but I wasn't going to do any of that.] I made the cake the morning I wanted to serve it, since it would be sitting around unfrosted.

The cake recipe was easy to make. I used real butter, substituted yogurt for sour cream, and used sour milk in place of buttermilk. I sprayed the pan with cooking spray with flour, but also sprinkled some cocoa on top of that so that the outside edges would be chocolatey. I only put some of the batter in the stadium cake pan (affiliate link), since you're supposed to fill it no more than ¾ full. I eyeballed it, so I definitely got it more full than I should have; some of the batter spilled over the pan into the oven. I baked it 35 minutes, and baked the rest of the batter in mini-Bundt cake molds. After cooling the cake for 10 minutes, I flipped it onto a wire rack and cooled it another hour before I decorated it.

Since this year's game was Packers vs. Steelers, my main colors were green, yellow, and brown, which was as close to black as I could get. Mini chocolate chips and mini M&Ms were just the right size to sit in the stands; I used lines of cookie icing to keep them in place. I also used some on the sidelines.

Last year I put tinted coconut in the center as turf; I wanted to do this again, but it was kind of messy. This year, I mixed together melted chocolate and shredded coconut and pressed them into the bottom of the hole for the field. I tinted more coconut by shaking it in a bag with a tiny amount of water and a few drops of green food coloring; I pressed this green coconut on top of the chocolate coconut layer to make it stick. I put a regular-sized brown M&M in the center of the field as a football, and used regular-sized green M&Ms for the Green Bay Packers' offense and yellow M&Ms for the Steelers' defense (which I arranged as best as I could on such a small field).

The chocolate cake recipe that I made was excellent. The cake was fluffy and had a rich chocolate flavor. It was exactly what I wanted. I was also more satisfied with my decorating than I was last time. The chocolate-coconut field worked relatively well. It was firm but chewy, like a candy bar, although not all of the turf stuck to the chocolate as well as I would have liked. Overall, I'm pretty pleased with how this cake turned out! 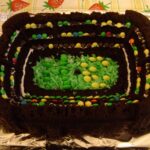