Bread, Week 8: I ordered pizza (for others) at work recently, and it smelled fantastic. It was the first time I really wished that I wasn't trying this gluten-free diet. I could have baked gluten-free pasta with pizza toppings, which would be tasty, but not quite the same. Sometime last year, I had come across a gluten-free cornmeal pizza recipe that stuck in my mind, and I decided to finally give it a shot this weekend. It's one of the better pizza crusts I've made.

I like experimenting sometimes, but when it comes to pizza, I generally stick to the same toppings: pizza sauce, mozzarella cheese, pepperoni (although I sometimes go for bacon or ham). For some reason, though, I don't mind cornmeal in my pizza. One of my favorite pizza places in town, Pi, has cornmeal in its crust, and it's fantastic, so I was hopeful that I would enjoy this recipe. The recipe makes 2 pizza crusts. Make both and freeze one, or cut the recipe in half. Or, just eat lots of pizza.

This is one of the better crusts I've made from scratch, period. It was very easy to make, and I was completely satisfied with the results.

This was not chewy, tear-apart pizza crust, but the crust had a satisfying bready texture. The crust was not floppy; it was neither hard nor too dense. The edge crust was crunchy. The cornmeal gave the crust a little heft, and the flavor was noticeable but not too pronounced. Alex thought leftovers were a little more crumbly than the pizza was when it was fresh, but I didn't really notice at all. For the second crust, I pre-baked it to set the crust, let it stay out on the counter overnight (I felt lazy), and topped and finished baking it the next day. The crust shrank up a little as compared to first crust, and the flavor of the cornmeal was more pronounced, but it was still delicious overall. I recommend you use strongly flavored toppings like pepperoni, rather than bacon.

Overall, this was a satisfying and easy recipe to make, and this recipe holds up against other recipes with wheat. I would make it again. 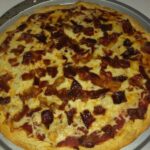