I've planned to corn my own beef for a little while. Yes, make my own corned beef from scratch. Alton Brown did it, and it didn't look too difficult. So I bought a brisket back in February, stuck it in the freezer, and planned to make corned beef for St. Patrick's Day.

However, you have to brine corned beef for 10 days before you cook it. I would have needed to start corning (brining) my beef two Wednesdays or Thursdays before St. Patrick's Day, and I was traveling around those dates. There was just no time.

I'm glad it worked out this way, though. Instead of making corned beef when everyone else does, I cooked it, and baked homemade rye bread to go with it, during a late March snowstorm (about a month ago!). I can't think of any way I'd rather spend a snowy Sunday than baking.

The corned beef was well-seasoned - I could distinctly taste the cinnamon. It wasn't too salty; it was flavorful but not overwhelming.  It was juicy and incredibly tender - much better than any corned beef I'd had before. (Although, I don't eat much corned beef - and when I do, it's mostly in hash.) The corned beef made for one of the more satisfying sandwiches I've had.

I turned the leftovers into a hash (basing it on Alton Brown's recipe as well), which also turned out well. The corned beef, plus a little salt and pepper, was all the seasoning I needed for it.

Would I corn my own beef again? Sure! It was incredibly easy to do, as long as you don't mind having a piece of raw brisket in your fridge for a week and a half, and don't mind handling the meat to rinse it off. I like that I know exactly what went into it - no strange chemicals in it for me! - and I like that it wasn't too salty. I think corned beef is definitely worth making from scratch again.

What to do with the leftovers? Try making hash. 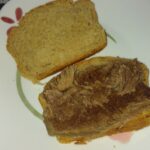 Homemade Corned Beef is much better than store-bought. It's easy to make, as long as you have a large pot, some space in the refrigerator, and 10 days to let the beef cure.