I decided to make New York Deli Rye Bread (from Peter Reinhart's The Bread Baker's Apprentice (affiliate link), of course) to make sandwiches out of my homemade corned beef. I was excited. This gave me a reason to buy rye flour, which I'd always wanted to buy. This also happens to be my first purchase of non-wheat flour since I began doing serious cooking and began this blog in 2010. (I bought other various starches several years ago, but they don't really count.)

This rye bread is a sourdough bread, and as such, it takes about 4 days of planning to make it. Or at least, I started on a Thursday to bake a loaf on Sunday. First, I had to revive my dried-out sourdough starter. I mixed it with equal parts flour and water and left it out, covered, on the counter overnight to let it come back to life. I fed it again in the morning, encouraging it to still be alive. On Friday evening, assured that my sourdough was still alive, I fed my sourdough starter so it would be ready for Saturday, when I actually started the actual dough.

Alex and I used sandwich loaf for corned beef sandwiches. The bread was sturdy yet soft and tender. The crust on the sandwich loaf, baked at a lower temperature, was chewy but not hard. Honestly, this bread turned my corned beef into one of the most satisfying sandwiches I've ever had.

The freestanding loaf I took to share at work. The crust was harder due to the egg wash, which made it a crunchier pleasure to eat. Everyone at work really enjoyed it, and I tried to send coworkers home with some.

The bread was a little sour, but not overly so. The caraway seeds really seem to define rye bread for me; I can't imagine omitting them. The onions seemed to be a large quantity when I started the dough, but they weren't too strong. They mellowed and blended into the bread, which gave my sandwiches a nice flavor; this was particularly for me, since I don't like condiments.

This bread makes me want to have sandwiches for lunch often. I have a 5lb bag of rye flour in my pantry, so I think that more of this bread is in my future. 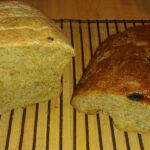