When I found the recipe for Chocolate Peanut Butter Cheesecake on the Smitten Kitchen website, I knew that it would be what I made Alex for his birthday. And I did, a little late, in 2014. It turned out beautifully, perfectly, but I never got around to blogging about it. So this year again, I baked for his birthday.

This is a fantastic cheesecake. The chocolate cookie crust was delicious, as was the peanut butter cheesecake, as was the chocolate fudge layer hidden beneath the cheesecake layer. Chocolate ganache covers the entire thing (and hides any cracks or flaws you might have, though mine surprisingly didn't crack).  The peanut butter cheesecake was smooth and creamy; it paired perfectly with all the chocolate. Overall this was a dense and rich cheesecake. I needed to cut slices very thin - about as thin as I could with a cheesecake - in order to be able to finish a slice. The only downside was that the crust was a little dense and hard in the corners where the sides met the bottom; that was the case two years ago as well, and I wish I knew how to fix that.

Given the separate layers, I find this an impressive dessert to make. No layer was particularly difficult to make. It took a little time and planning, but I didn't have trouble making it with my toddler watching me (though it helped that she snacked on chocolate animal crackers in the meantime). I had it done in a morning, aside from the ganache on top.

If you love the combination of chocolate and peanut butter, this is definitely a dessert for you. 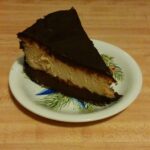