I finally wised up and stopped making so many cookies and baked goods to ship to friends and family for the holidays. In 2015, I started making these fudgy bourbon balls as one of my food gifts.

In every package I send, I give a note telling what is included (usually including hot chocolate mix, marshmallows, often but always fruitcake), as well as a list of ingredients, in case they share with friends with food sensitivities. Or in the case of fruitcake (and these bourbon balls), in case they share these alcohol-laced desserts with anyone under the age of 21 (although I don't think we know anyone like that, aside from our kids), or anyone pregnant, or anyone who would like to avoid alcohol for whatever reason. I don't specify that the alcohol hasn't been cooked out.

Two years ago was the first time I made bourbon balls as gifts. Just a few days after Christmas, my grandma passed away. When we all traveled to her house to prepare for the funeral, the only thing that had already been eaten were the bourbon balls - only half were left. Grandma would grab one here or there, and kept telling my mom and my aunts, "Leona's bourbon balls are so good!"

It was a great memory to latch on to during those days between Christmas and New Year's Day. It would give us a good laugh. The memory of that still warms me.

In part because of this, I'm likely going to make these bourbon balls every Christmas for years to come. But even without that memory, I'd still make them. They're delicious. Like Grandma, I like to snag one on my way out of the kitchen. 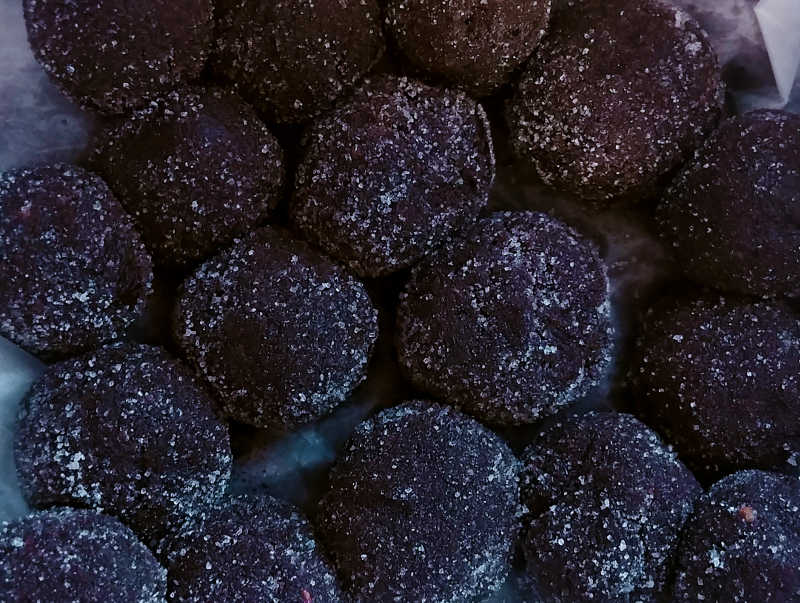 These fudgy bourbon balls will stay good for weeks, without refrigeration, so they're a great holiday snack to make in advance. They're good with rum instead of bourbon (for those bourbon-haters in your life). They're also fantastic with the substitution of apple cider for a non-alcoholic version; in that case, they're delicious little brownie bites.

Bourbon balls couldn't be easier to make. Although the recipe for Smitten Kitchen isn't what I used back in 2015, I found Deb's to be very easy to make. As in, I made it 4 times last year (2x bourbon, 1x rum, 1x apple cider). Simply grind chocolate animal crackers and pecans with bourbon, powdered sugar, cocoa, and molasses in the food processor. (I just ordered this Breville food processor (affiliate link) and I love it. It beats the pants off of my Kitchenaid one.) Let rest briefly, then roll into balls and coat in sugar. The recipe is forgiving; these were delicious even when I ran out of chocolate animal crackers and had to use plain/vanilla ones, and when I skipped toasting my pecans.

I found that I preferred rolling these in regular granulated sugar over colored sugar (which bled onto everything when stored in a container) and powdered sugar (which became slippery when stored with other balls). Smitten Kitchen rolls hers in sprinkles and they look pretty, but I'm not a big fan of sprinkles (Sprinkle Cookies and Confetti Cake notwithstanding), so I haven't tried that. I store the bourbon balls in a tin (nearly airtight), in single layers on sheets of waxed paper. They stay moist for a month if the container is airtight, but as mentioned above, it does make a powdered sugar coating a little soggy and not very pretty; granulated sugar is the way to go. Apple cider brownie bites keep in the fridge for 2-3 months.

If you want to make more than one type (bourbon balls + brownie bites made with apple cider) like I have, I recommend using different toppings and different size scoops. For a potluck, I used a small (2-teaspoon or #60) cookie scoop (affiliate link) for the bourbon balls, but I made apple cider balls using a tiny 1.5-teaspoon cookie scoop (affiliate link) - adult sized and toddler-sized.

The bourbon balls mellow as they age. That said, use a smooth bourbon, rather than an assertive one. I like to use Four Roses in these.

Can I Make Bourbon Balls Nut-Free?

Can I Make Bourbon-Free Bourbon Balls?

Yes! They are delicious this way. Use apple cider instead of bourbon to make them non-alcoholic. They're fudgy little truffles that way!

If you still want them to contain alcohol, use rum. I recommend using molasses instead of honey in that case as it enhances the rummy-ness.

Want to give bourbon balls as gifts? I usually use small plastic containers (Glad 14-oz snack size is perfect; I find them at Target at Christmas-time) and fill them halfway; place a small sheet of waxed paper on top; then top it with more bourbon balls (for a family or couple or an individual who loves bourbon) or a sealed cellophane package of candy (such as Microwave Peanut Brittle). You can put them in cellophane without a hard container, but they can be easily be smooshed, so beware of that if you're shipping them. 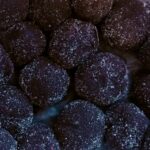 These delicious, no-bake treats are easy to make. You can substitute rum for the bourbon if desired. They can also be made kid-friendly by using apple cider instead of alcohol.

You can substitute rum in this recipe. Molasses really melds well with the rum.