I've heard biscotti are a great food to give as gift. I've never given them myself, but I loved receiving them once. Making biscotti as a food gift was likely what I had in my mind when I bookmarked the recipe for Espresso Biscotti, but I finally just decided I wanted to make them for myself.

You should definitely use an electric mixer to make these biscotti. There's not a lot of moisture in biscotti dough, so you'll need to whip the butter to get all the dry ingredients to come together properly. My stand mixer worked best at getting this dough together; a hand mixer will take a while.

I mixed together flour, sugar, cocoa powder, ground coffee, baking powder, and cinnamon (I skipped the salt because I used margarine) in my stand mixer with the paddle attachment. I added equal parts butter and margarine and mixed until everything was dry but combined. I added the walnuts, and then added the 2 eggs and vanilla, mixing until the dough came together like a chunky cookie dough. (If the mixture is crumbly, you won't be able to mold it together - so don't give up mixing it!)

I weighed the dough to form 2 equal pieces and shaped them into 14-inch logs about 2 inches wide. I baked the logs on Silpat-lined sheet for about 20 minutes at 350F, until a toothpick inserted in the log came out dry.

I let the logs cool for about 10-15 minutes and then cut them into pieces. The recipe says ¼ inch pieces - I think that's too thin to reasonably cut. I tried getting mine that thin, but they were generally ⅓-1/2 inch thick pieces. Pieces of the biscotti broke off as I put them on the baking sheet (so I ate them like cookies, without re-baking them). I baked them at 300F for 10 minutes per side, flipping them over halfway through. I let the biscotti dry on the baking sheet after I removed them from the oven.

These were pretty good. They had a strong coffee flavor - a good, not too sweet mocha. I really enjoyed the addition of walnuts to them. The cinnamon flavor was noticeable but not too strong. One of the things I really like about homemade biscotti is that they're not incredibly hard in texture. I found it really easy to munch on these.

I will likely make these again at some point, with one change: I will likely make them bigger. It was a pain handling all of the pieces making this tiny biscotti. I would need to adjust the baking time if I only shaped a large log, perhaps baking it 25-30 minutes, and re-baking for 15. If anyone out there has suggestions, please feel free to let me know. 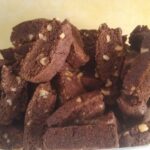