I was going to make something for a going-away party, and when I asked what the guest of honor's favorite desserts were, her friends all said that she loved chocolate and peanut butter, Nutella, and the Brownie Cheesecake that I made last month. So it was easy to choose - Nutella Cheesecake it was.

As luck had it, I didn't have to search far for a good recipe - there was a Nutella Cheesecake recipe on Gimme Some Oven. The recipe looked straightforward and delicious.

I always love to tell people about how easy cheesecake is to make. And I maintain that. But here's some very important tips from my recent experience:

First, don't make cheesecake when you're short on time or patience. You will feel rushed and lack confidence. Even if, like me, you have made cheesecake often. I was in the middle of a rough week when I made this cheesecake. Cheesecake requires patience and confidence, and I lacked both.

Second, refresh yourself on when your cheesecake is done, before you have to check for doneness. Cheesecake is generally done when the top doesn't look as wet and shiny anymore; when it is set about 3 inches from the edges; and when the temperature taken with a probe thermometer (affiliate link) in the center is 150F.

For instance, when I made the Brownie Cheesecake, it was easy for me to see that the cheesecake was done. This cheesecake had more batter, so the whole cheesecake seemed to move when I jiggled it. The dark chocolatey batter still looked wet in the center (much more so than the lighter batter), so I kept baking it, and baking it. I was rushed and lacked confidence in my cheesecake-baking ability (gosh, that sounds dramatic) and forgot to look up doneness in advance. I didn't trust myself. So I overbaked the cheesecake and it developed a huge chasm in the center as this cooled. (If this happens, though, don't fear. Despite this, it was still creamy and delicious!!!)

Which brings me to my third tip: plan to top your cheesecake. The cheesecake was delicious, but just not very pretty until I put the Nutella cream on top. Cheesecake will almost inevitably crack (even my Chocolate Caramel Cheesecake did), so if you're not sure the cheesecake is done, just take its temperature and leave a hole in the center. Topping cheesecake to hide it is easy. (And, as Alex reminded me, a hole means you're basically filling your cheesecake, which is delicious.)

Back to the actual cheesecake. I cut back on butter in the crust a tiny bit since I used less butter for my last cheesecake. Still, I parbaked the crust as per the instructions on Gimme Some Oven, and I think that (or maybe it was less sugar) helped keep the butter from leaking out from the springform pan, which was nice for a change. This is now my favorite cheesecake crust.

I'm not actually a huge fan of Nutella - it's very sweet. But I know many love it. If you love it and want a lot of Nutella cream to top this cheesecake, you will need 2 jars of the chocolate hazelnut spread. You only need one jar if you halve the topping, which is what I will do in the future, which will make it a little less sweet. Nutella is the brand name for the milk chocolate hazelnut spread. I don't eat it often, and I don't notice a difference between it and the generic stuff. I had a coupon for the name-brand stuff, so I got one of each.

The cheesecake takes 3.5 packages of cream cheese. (If you don't eat cream cheese on bagels or anything else, you can do what I plan to do - make 2 batches of Sprinkle Cookies with the remaining cream cheese and freeze the dough.) You whip together the well-softened cream cheese and Nutella; add sugar, vanilla, cream, melted chocolate, and eggs in various steps.

You can bake the cheesecake in a water bath (which the original recipe uses, and which may help reduce cracks) if you'd like; the once or twice I've done it, water seeps into my springform pan. Instead, I had a pan of water creating steam in the oven; I'm not sure if this was helpful or not.

Chill the cheesecake well (8 hours, less if you freeze it to speed cool it), then top with a Nutella cream.

This cheesecake was really good. It was superbly creamy, despite my fears that I had horribly overcooked it. I expect this was because of the extra cream in the batter. This rich cheesecake itself wasn't overly sweet; the Nutella cream on top sweetens it up. I overpoured the cream for my topping so I could only pour half of it on the cheesecake without it running off; only using half the cream made it the right level of sweetness for me. Use the full amount of topping listed for maximum sweetness and hazelnuttyness, and half for a slightly less sweet dessert. Serve to those chocolate-hazelnut fans in your life. 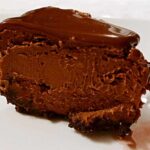